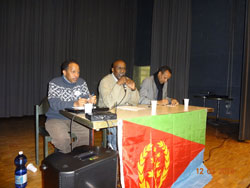 Mr. Sleshi Idris, head of public and community affairs in Switzerland, gave extensive briefing on the objective situation in the Homeland and the region, as well as development activities in the Homeland.

The participants condemned the baseless illegal Security Council sanctions resolution against Eritrea at the behest of the US, and reaffirmed resolve to mount staunch rebuff and work for the success of national development programs.