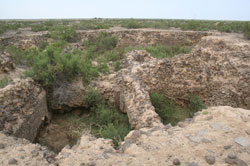 The second phase of excavation is underway in Adulis in order to further analyze the ancient civilization of the ancient port, disclosed Dr. Yosef Libseqal, director general of the Eritrean National Museum.

Adulis, 20 February 2012 – The second phase of excavation is underway in Adulis in order to further analyze the ancient civilization of the ancient port, disclosed Dr. Yosef Libseqal, director general of the Eritrean National Museum.

Dr. Yosef said that the excavation that is being conducted in four places in five phases is in progress with cooperation of Eritrean and Italian archeologists so as to scientifically rewrite and deeply understand the different unscientific excavations made by different researchers.

He indicated that so far traces of potteries, charcoal and bones similar to that of Adulite, Axumite and modern architecture have been found and with that there is indication that the site has been damaged and buried due to consecutive natural calamities.

Likewise, Mr. Lalimba Tsehaye, Mr. Yonas Zemui and Mr. Medhane Gebrezgiabher, members of the National Museum who are participating in the excavation activities said that the site has been severely damaged as a result of the unscientific excavation previously undertaken by foreign archeologists and reiterated that the current encouraging finding would open the door for further exploration and research.

Italian Archeologists Professor Serena Nassa, Dr. Giulio Bigliardi and Dr. Chiara Zurraro explained that they are fascinated by the finding of ancient traces and indicated that these are indications that Adulis has been the basis of ancient civilization.

Likewise, Mr. Umer Idris and Mr. Mohammed Sheik, residents of the area who are working at the site, expressed their impression for they have witnessed with their own eyes from the excavation of the Adulis civilization that they use to get aqcauinted through legend.