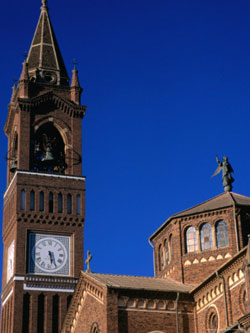 THE FOUR ARCHITECTURAL STYLES APPLIED BY THE ITALIANS IN ASMARA

ECLETIC ARCHITECTRE
Architectural styles remain largely eclectic with no significant consensus or stylistic direction among colonial architects and engineers. These eclectical architects are visible in most Asmara’s key buildings constructed before 1935 all of which displayed a blend of styles including elements of classical, Lombard, Romanesque, renaissance, medieval and vernacular forms. Truly ecletic architecture embodies the belief that no one aesthetic should dominate to the detriment or exclusion of others. It involves not direct imitation but instead an organic recognition of a wide variety of forms with reference to their original historic content. Albergo Italia, Post Office, Cinema Asmara, Cathedral, Italian Embassy, ETSS Center are examples of this style of architecture.

RATIONALISM
The early architectural style was facing competition from another modern movement in architecture and design, known as Rationalism. This new style was a distinctly Italian variation of the international style or modern movement inter singly popular else where in Europe. Rationalism is claimed to be particular attentive to functional requirements and constructed with modern materials made into forms that evoked spirit of a machine civilization. Examples of this type of architecture are Cinema Roma, Tobacco Factory, Cinema Impero, Wikianos Suppermarket and Selam Hotel.

MONUMENTAL ARCHITECTRE
Monumental architecture is a kind of architecture to portray the popularity of a regime or a leader in power or for the pleasure of individuals. Monumental buildings can be identified by their towering structures and their massive beautiful architect- doors and windows. Monuments usually have a tower. The building of Asmara Municipality  is one of its kind.

INDIGENOUS ARCHITECTRE AND ITS INFLUENCES
Although the first manifestation of Italian Asmara included the area west of Mai-Bela, it is important to acknowledge the existence of indigenous villages occupying the village of Asmara, which predate the arrival of the Italians by over one thousand years before Baldissera Fortification. The only buildings on the plain of Asmara were traditional dwellings for the local population, nobility and a Church serving the villages of Arbate Asmara.Traditional dwellings and their method of contraction was certainly worth to note. Two types of dwellings are broadly found in Eritrean highlands. The Hidmo and Agudo were more commonly used.

Further more the “Monkey Head” construction technique, which is indigenous to this region, is also common around Asmara. This unique vernacular construction technique called the monkey head predates both the Hidmo and Agudo. It takes it s name from the use of pro trading, rounded off wooden cross members (dowels) to bind together horizontal layers of wood between layers of a stone in a wall. This technique preceded the use of lime mortar which was introduced to Eritrea from Yemen in the mid seventeenth century and used extensively during the Axumite period. The monkey head technique was designed to bind the wall and provide support, while making use of available resources evidence of it s use existed in Asmara when the Italians arrived and still can be seen in some areas of entertainment. Traces are also found at the pre-Axumite historical site of Qohaito. Hidmo is a substantial structure, fabricated from wood, stone and soil. Hidmo is found only in the Eritrean highlands. Substantial amount of woods is needed to build a Hidmo. Hidmo rectangular in plain, with at least two partitioned areas inside and a flat roof , entry is through the main door at the front of the building. An extended roof at the front acting as a vernacular known as “Gebela”. The construction of HIDMO incorporates twelve tree trunks supporting the weight of the roof constructed from layer of branches boarded with soil , and the stone wall is often closer to a meter thick.