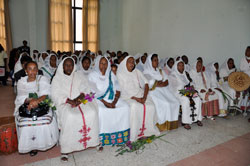 International Women’s Day was colorfully celebrated today inside the country and abroad under the theme “Our Unity and Steadfastness Gateway to our Bright Future”.

Asmara, 8 March, 2012- International Women’s Day was colorfully celebrated today inside the country and abroad under the theme “Our Unity and Steadfastness Gateway to our Bright Future”.

In the celebrations conducted in Asmara, Mr. Kahsai Gebrehiwot, Administrator of the Central region, said that Eritrean women have made history during the armed struggle for independence and safeguarding the nation’s sovereignty, as well as in the nation- building process. He further explained that realizing gender equality reinforces the development drive in the country.

Mr. Yosuf Saiq, Chairman of the PFDJ in the Central region, noted that the activities being carried out by NUEW in all aspects ensure the participation of women, and called for strengthening organizational capacity in order to reinforce their participation in national programs.

Likewise, Ms. Tek’a Tesfamichael, head of NUEW in Central region, on her part underlined that Eritrean women are fully aware that peace would not be attained without social justice, and that they would participate with self-confidence in efforts to build a developed nation where social justice prevails.

On the occasion, awards were given to female High School students who scored full points, those who scored good results in the School Leaving Certificate Examination and the Grade 8 national exam, as well as to women who received six months training in weaving.

Meanwhile, in a statement it issued in connection with March 8, the NUEW reiterated the resolve of Eritrean women to reinforce participation in endeavors to build a developed nation in which social justice prevails.

The statement further underlined that Eritrean women paid heavy price during the armed struggle for independence and vital role in safeguarding the sovereignty of the country, and voiced determination to reinforce rebuff against the illegal sanctions resolution.