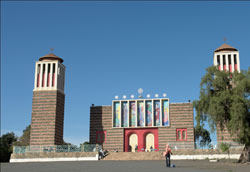 According to information obtained from the local people, the construction of the Saint Mary Church began 2400 years ago when a man coming from Jerusalem reported to have brought the holy ark of the covenant to this place. Before the construction of this modern Church the local inhabitants had a small Hidmo Church for their services since the 7th century.

The new Church was assumed its previous name dedicated to Kidisti-mariam (saint- marry). The construction of the Church took two years (1319-20). The previous Church was build using the monkey head techniques build with stone and tree and topped with an orthodox cross. The wall of the interior was decorated with colored paintings of saints, other dignitaries of the time like chieftains and high priests and inscription with the ancient language Geez.

The original village of ARBATEASMARA was once located on the site occupied by the Church. However, after the Italian occupation the village was moved to the north east out skirt of the city. The original site remained of vital importance to the indigenous community for the Church stood on the crest of the hill where the present one is located.

The construction started with the building of DEGGI-SELAM. An out lying at the entrance of the church compound was designed in 1917 by the renowned engineer Edwardo Caragnari. The towers of the church by and the building had a conical concrete roof imitating the grass roof the AGDO. These were two of the first structure to illustrate to the aesthetics and material of vernacular styles. Until the Italian innovation, architects and engineers knew little about such style and didn’t fully acknowledge that this attitude contrasted with the endorsement and imitation of the Moorish style of north Africa, Middle East in the construction of modern buildings is such cities like Tripoli, Mogadishu and even Massawa.

The construction of the Saint Marry Church is a combination of Italian and Eritrean religious styles, with its twin towers. In 1920 an Italian architect Ernesto-Gallo designed a second church to replace the original. The main building is composed of three massive elements. The new church featured AGDO style roofs on the two towers that stood in the left and the right side of the main church, at each corner (top right).

It is evident that the architects of this building were respectful of local vernacular architecture. This two soaring towers each support a white construction (with elongated openings on each side) which contains the church bells. These towers were using for storing religious objects and clothing. On top of the towers, cylinder shaped brick work supports a concrete tukul.

The main church was rectangular in plain and had a raised central nave and its walls were built using the monkey head techniques, with dowels of white juniper. Windows and doors were set in-steeped frames that provide ample shade and emphasized the building over all solidity. On either side of the door there are two windows against a red ceramic tesserae ground is echoed according to a regular scheme.

There is impressive mosaic structure showing religious scenes added in 1938. The mosaic is surmounted by seven Axumite crosses. The square-plain interior includes a wide central nave and decorated with precious fresco’s which dates back to 1939 and show episodes from the Old Testament and from the life of Saint Marry.

Asmara: The Ever thriving City (Part I)