Asmara: The Ever thriving City (Part I) 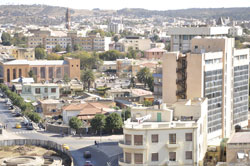 Unity is the hallmark of Asmara ever since the city’s very founding. Work ethic that emanates from this very cord of unity also adds a flavor to this admirably unique charisma of the city. These and other qualities make the city-a city where everybody lives in harmony with ever intensifying love and a destination where everybody eagerly visits. But, how was the very founding of Asmara. What about its modern history and phases of developments that continued to date. Let’s have a look on its architectural wonders, establishment of factories and other service rendering institutions, livelihood of the city’s inhabitants and their views on day-to-day activities and its steady developments in every sector.

Historical development of Asmara, which is now among the world’s top ten tourist attraction city, was originated from what has been mentioned earlier. In the later developments of the founding of Asmara as a city, which is in the late19th century, Italians colonizers issued “Municipio Di Asmara” under proclamation number 846/1932. This was later revised with the issuing of a new master plan on 21st January of 1935 under proclamation number 166. At that time the city’s borders were clearly demarcated and all sorts of administrative activities started ever since.

During the Italian colonial era, preliminary constriction activities started in the areas around Sematat Secondary School and in the eastern part of today’s Asmara. But, these buildings were not that much modern as compared to the later art deco buildings. Modern construction technologies were then introduced in 1893 with construction of court houses, hotels and most notably the construction of Cathedral which is uniquely admired for its architectural beauty. In the 1900s, in a range of just three years, the Italians constructed around 100 buildings. Where as, this did not continue in the pace it started until 1908. Post office and Hamasien hotel are instances of the construction activities of this particular time. At that time, erection of electric lamps, construction of recreation centers, housing projects, and swage systems were implemented.

This being the emergence of modernism in Asmara, how has this been further enhanced in the post independence period. What has been the contribution of every Eritrean in every development sector and how is the city’s sanitation? What the city’s daily activities looks like?

Early at dawn, besides observing a number of people flocking to places of worship, one could see sanitation workers cleaning the streets of the city to make sure that everybody who passes by the streets enjoys the cleanliness. Its cleanliness is indeed among the qualities which makes Asmara one of world’s top 10 attractive cities. Around 400 women have been engaged towards securing the city’s sanitation. Social service rendering institutions also make preparations to offer services to customers, with due care and respect which is an epitome of good work ethics.

Every day, early in the morning, one could see lively movement of people from and to different areas of the city by different means of transportation system. The most vivid one is, however, the flocking of carts to Asmara diary factory which is situated north of Bahti Meskerem square. Dairy farmers’ from villages around Asmara say that they wake up at 4 a.m. to secure milk supply to this factory for further processing. Asmara dairy factory gets about 9000 liters of milk from these individual farmers every day. This amount of milk, however, does not meet the city’s demand. Hence, milk has been supplied to Asmara markets from different regions of the country.

Just through making a two hours tour from and to different parts of the city, one could learn a great deal of the city’s daily activities. One would be just amazed by the vivid movements he comes across in every step. It is one of the daily happenings to see athletes making exercises and cyclists riding bikes. The success stories the country has been achieving in these two sports activities indeed emanates from the strenuous exercises and formidable challenges of individuals who are engaged in sports activities. A number of athletes make regular trainings in Asmara. The athletes express that they prefer to make the required trainings in Asmara to take advantages of the city’s high attitude. There are a number of athletes who have been following food steps of Zerisenai Tadese-the first Eritrean athlete to wind a bronze medal in the Olympics and who are still ranked as one of world’s top athletes. This time, around 250 athletes have been making regular trainings. Asmara Stadium has been renovated and likewise the availability of extra sports fields would be really encouraging to conduct multi-sports activities.

With the elapse of each minute, the city’s color of activities becomes more vivid and multi-faceted and strong enough to grab ones attention. One could see workers heading to their work places, and students’ making rush movement towards their respective schools on foot or by public buses which are in fact the most noticeable activities in the morning hours.