Proud being an Eritrean 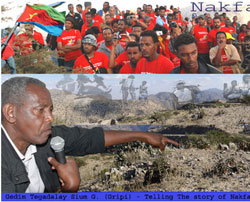 Eritrea………. When you hear that name it’s not just a country but a spirit of encountered emotions in critical situations that define events….. This spirit is protecting the landscape of my country Eritrea. Eritrea rings in my head all the time and I think with precise manner and passion about that word Eritrea. I am extremely familiar with this word, but do not know what it really means. My country’s relationship with me has always muddled me, but I know for sure I will find my way fast. Eritrea is like a long enchanting pathway that keeps on going because of many anticipating events. But the pathway was the strongest full of emotions when we went through our 30 year long arm struggle full of cool hatred for the sacrifices made. The mind set of our precious Shaebia was to liberate our country the focal point. It was such a simple brief mind set with a great desire. Young Eritreans at the age of 16 were very courageous to enter the battle field against outnumbered and experienced armies in order to liberate our country. So much was lost with pain, agony and misery with endurance, but Shaebia kept charging like a battery. After years of so much being lost we finally liberated our country.

This action represented freedom and a new age of peace, hard working people, and excels for the future of our dear Eritreans. There were many amazing stories to hear of each single Eritrean that happened during the struggle. But there was one story that got me thinking of the true meaning to be an Eritrean. As we all know Eritrea’s long arm struggle represented ourselves as true Eritreans. To enter the painful, dreaded battlefield meant you had to have true dignity. The type of Dignity the TEGADELTI had. They had a bulldozing amount of courage, strength, persistence, and determination to go through melancholy moments just to liberate our country. These types of actions and characteristics showed how a true Eritrean would act in the intense moments we had as a country trying to free itself …… I said it. I said the word free. Also known as freedom. Such a brief word it was. But the word meant so much and was so hard to earn. In order for our beloved mother land full of graceful Eritreans to be free we had to fight for it. Fight till every single part of land was free full of angles blessing it. There was no other objective for our young brave combatants that they had in their mind. The young brave dedicated fighters fought and sacrificed their lives to get what they needed for the future generation. If it wasn’t for them I would never be here writing this piece of history. Our entire Eritrea would be vanished if it wasn’t for them.  This is how I learned what it really meant to be a true Eritrean. But there was one super important place to me that was like an electrifying living thing to address us of our brave fighters in heaven. It is called NAKFA.

I am sure all Eritreans know of this remarkable place of steadfastness (City of Martyrs). Nakfa was a battlefield that carried a prophecy….. Of mystified courage from Sheabia that was produced on that land. Nakfa was one of the most hardest and intense places to liberate and to defend. The Shaebai fighters spent day and night nonstop of working to death with blood and sweat and uncountable battles against the enemy. It didn’t matter if it took years. They kept fighting to their hardest until they liberated it and could and see the clear ample of angels. The place is full of memory pointed there forever that will always be remembered at the bottom of Eritreans hearts.

The amazing fast pace description that got me thinking was a story by a person who was named Tegadalay Suim Gripi who told the YOUNG PFDJ in a conference at NAKFA at the end of 2011. Suim was part of the fighters of Nakfa. He visualized the past hard times with his comrades with the crowd.  At the beginning of his narration he told the crowd of the story of the holy land of NAKFA. He described himself as no one to tell the story of Nakfa compared to those people who fought courageously alongside his line that sacrificed their lives and paid the price for our country to be free.  He was in very deep emotion and precise about our brave heroes. He touched everybody’s heart with his sweet and original words towards our heroes’ story. He introduced his great speech by asking the YPFDJ crowd what exactly you wanted to learn from this place (NAKFA). Tegadalay Suim told about the miracles of survival skills of our fighters that they developed in their time. Our majestic Shaebia fighters survived with very limited water, food, clothing, and the ammunition for their battle. At one point of time there was no applicable balanced food or nutrition that their bodies needed. Suim explained how tough it was at that time, but the brave fighters resisted against all miserable, painful life with no sleep and countless battles. It was a steadfastness skill that they had to carry on their daily basis to survive. There were no other options they could go through till their last minute of their life. When one of their brothers or sisters died, they only had a very short time to say goodbye and leave to the mountains and build trenches to save their lives for the next battle. We can imagine every single day had its own set of challenges, no matter what type of problem the fighters had right in their faces. Shaebians had wisdom to go through it. It didn’t matter how harsh the problem was.

Sheabia went right through it just to liberate the country. Sium Grippi described the steadfastness of the fighters very accurately and very touchingly to inform the crowd of what it was like and how they handled the situations they were in. But Sium Grippi reminded all places surrounding Nakfa had their own memorable history. To mention some that were important in our war that carried hard emotions laid on the land because of Sheabia. There was Nakfa, Mountain Stretched from Halhal front, Demieka, Enda Kolkal, Merkebna, Tsifeta, Senit, Ruba Anseba, and Tehamel part of left flank Nakfa front. Siwara, Bet Hamed, Teasta, Nakura, Fernelo, Lajin, Denden and Gual Denden, Rigole, Globe, Taba Selam, Fidel Pe, Keyih Mereit, Taba bilhat, Andeb, Enda Siga, Taba Wufuyat, Sulfer, Enda Gudub, Hamukushti, Kubaniaya, Mendaat, Taba Arbe, Volleyball, Acrobat, Taba Megzaeti, Taba Hatsyinet, Taba Freweyni, Taba wedi Ghebru and other bases like Orota, Himbol, Amberbeb, Halibet and many more.

Each place played an important role like a piece of a puzzle. Once you completed the puzzle it created Eritrea’s history. These places were extremely important because of the memorable things done there that just gave an imperial meaning. It definitely meant a lot for Eritreans. It carried our Martyrs glory and actions. One important story Sium Grippi told was a story that got its main idea from our long arm struggle. There was a man named Mohamed who was a veteran fighter who risked his life in the war to help liberate the country with his other fellow brave Eritrean fighters. Even though Mohamed was fortunate enough to have survived from the showers of multiple wars, he sadly went through hard times because he became disabled in many areas. Mohamed had a serious head injury that produced a nightmare for him. He lost his two eyes after his head injury happened in the war. Then further in his life he lost his hearing and speaking ability. He was then taken to a camp called Measker Denden (Kanew) to get assistance. But it was extremely hard for them to communicate with him. It was a battle of pain to help Mohamed, but they tried their best to assist him even though there was a lack of understanding of what exactly he wanted and what he wanted to do. He had to shed tears sometimes to get the helpers attention. One day a woman from a small city called Teseney came to the Masker Denden (Kanew) to pay respect to our role model heroes. She was amazed of Mohamed’s history of struggles and she felt bad of how Mohamed sacrificed a lot of things during the 30 year long arm struggle. So she wanted to pay him back. So she wanted to marry him.  So they married joyfully and had 4 children. Mohamed recognized his children by touching their faces. This was a magical and touching story that showed how amazing and indescribable her miraculous mindset was. Sium Grippi explained how Mohamed paid almost his whole life to liberate the country and received something back in his life from other great Eritreans who understood deep in their hearts of what type of journey our dear brave fighters took. The first step they took into the battlefield marked an indescribable step of wisdom, patience, and incredible dedication and patriotic wars to liberate our country. The woman who married Mohamed understood this all. She read the pain and agony that Mohamed had from the war and right now. She knew indeed that he needed to receive something back because of his incredible sacrifices made just to liberate the country in a brave and epic manner. This woman was glad to be the person paying Mohamed back because of his patriotic duties. It showed how one person could make such a big difference in a person’s life with one action. This woman was a miraculous descent from the Heavens who blessed Mohamed. Now I fully know what it means to be a true Eritrean. You have to have a unique mindset and patriotic dignity and have a brave heart and be daring.