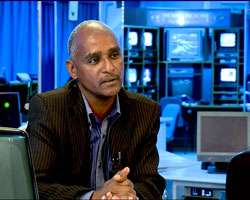 There have been reports of recurrent earthquake incidents in the Northern Red Sea and Southern Red Sea regions. What has been the cause? What are the predictions about feature developments? Are these incidents threatening? Shabait has conducted a brief interview with Mr. Berhe Goitom, instructor of Geophysics at Eritrea Institute of Technology. Excerpts follow:

There were repeated earthquake occurrences on 6th March 2012 in vast areas of Massawa for a few seconds, for instance, at 1:40, 5:00 and 5:30 p.m. What do such occurrences in just a difference of a few hours signal?

The main cause for earthquake occurrences in the environs of Massawa is the impact of volcanic eruptions that occur a few months ago in the Southern Denkalia area and particularly of the eruptions at Nabro and Sireru. This area is in fact one of the volatile areas with high potential of earthquake occurrence. Taking in to account last year’s volcanic eruption as an instance, it is natural for such occurrences to happen in such areas. The earthquakes we are witnessing this time are just impacts of the yet not solidified magma.

The earthquake happened repeatedly in a difference of a few hours in this particular area. What could be the reason?

It is highly significant to understand the very causes for these earthquake happenings. The main cause for such occurrences, as I mentioned earlier, is the volcanic eruption and it is natural to see continuous occurrences as long as the magma doesn’t cease moving beneath the volcano. Hence, the occurrences would be influenced by the time range the molten rocks take to be solidified. However, if magma flow continues there would be a recurring earthquake.

Last year, in the same month, that is, on 25th March, there was an earthquake in different areas of the country and particularly that of Irafayle was measured 4.8 Richter scale. It was then reported that such occurrence were impacted by underwater volcanoes. What are the associations?

Most of the time, earthquake emerges when plates spread apart or diverge or else when these plates collide. As the boundaries between plates pass through mid-oceans, the mid-oceanic ridges are very susceptive to generate earthquake. That is why the earthquake in Irafayle is associated with underwater eruptions.

Earlier on March 3 there was earthquake occurrence in Massawa that was measured 3.1 Richter scale. This similar occurrence was also reported to be due to the drive from Arano in Southern Denkalia sub-zone. This is but becoming a regular happening. Despite the dire consequences that may happen, how helpful are these occurrences to make precautions?

Earthquake is becoming a major global concern. Such incidents are also repeatedly witnessed in Eritrea. But, so far there are no mechanisms that could help to make predictions. But through recording histories of earthquake incidents, there are ways of identifying areas that are potentially susceptive for earthquake. There are earthquake range recoding equipments. However, the equipments so far installed in Eritrea do not have an easy access for online transmission of information. Hence, the recoded data needs to be further processed. This is in fact a time consuming procedure, but it gives preliminary information about such occurrences which could help to take some measures.

There are areas in Asia where Earthquake is a common happening. Also in Eritrea there are potentially risky areas in Southern Red Sea and also in Northern Red Sea regions like Sireru, Bada, Irafayle, and Massawa and other areas around Adulis. Is this associated with the geographical location and geophysical formations?

There are areas where earthquake could be erupted any time. In Eritrea, for instance, there are places that are identified as potentially risky areas. The common factor for such happenings is the potentials of eruptions that could happen beneath the Red Sea which is liked with the Mid-oceanic ridges; another is the eastern and southern rift valley belt that crosses across northern Eritrea right down to Kenya and Ethiopia and to South Africa. Active or passive volcanoes around Sireru, Nabro, Dubi could also become reasons for earthquakes. There is also a very least earthquake potential in Anseba or Nakfa faults (due to displacement of rock layers). Thus, even though to a limited extent earth quake may happen in areas north to Keren or north of Nakfa. And generally, there is high potential for earthquake to happen in countries situated around the plates.

Could you please tell us about the active and passive volcanoes in Eritrea?

Nabro used to be a passive volcano. But, since it has erupted recently in June 2011 it has now become active volcano. Most earthquake occurrences of the 2011 and 2012 that happen in Eritrea are confined to this area alone and are closely associated with such incidents.

There is also a very recent report of earthquake incident on the 12th March in Nabro. What are the predictions about this?

Besides the earlier equipment, we have installed eight additional instruments right after the volcanic eruption in Nabro. The data obtained from these instruments would be helpful in forecasting what the developments would be. Nevertheless, it is to be noted that there was no record of serious earthquake occurrences in Eritrea for the past 40 years. So, there are no expectations of earthquakes occurrence that could cause huge damage. Notwithstanding this, we need to clearly identify the areas with high risk potentials and make due caution in construction activities and generally in putting infrastructures that do not consider the nature of the area.

Despite earthquake occurrences and volcanic eruptions in the country no precautions have so far been taken. What could be the reason?

There are a few incidents of earthquake and volcanic eruptions in Eritrea. One could not say that no safety measures have been taken due to the least occurrence possibility. With each occurrence researches have been conducted thorough visiting the sites. Last year, for instance, prior to the volcanic eruption at Nabro there was, on 31st March, earthquake occurrence in Sireru that was measured 4.6 Richter scale and researchers from Eritrea Institute of Technology and Branch Office of Geological Survey were sent to the place. According to the research they conducted they submitted reported about the necessary precautions to be taken. We are working to further enhance such researching activities through training professionals on that filed and through installing fixed instruments, apart from that of the four instruments so far installed in Adi-keyih, Asmara, She’eb and Ghelalo.