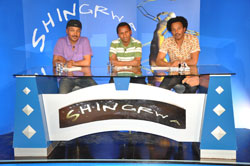 The selection of 5 best out of 10 contestants of the 4th round Shingrwa contest is getting challenging, stated Mr. Michael Tesfalidet, manager of the program.

Asmara, 19 March 2012 – The selection of 5 best out of 10 contestants of the 4th round Shingrwa contest is getting challenging, stated Mr. Michael Tesfalidet, manager of the program.

He told ERINA that the strong competition observed during the 3rd round got stronger in the 4th round and that according to the schedule judges had to identify the best 5 out of the 10 contestants last week. He also

indicated that because the judges have found it difficult to give their ruling, the announcement of the result would be delayed.

Mr. Michael further explained that because the first round was conducted in every region it demonstrated the nation’s cultural diversity and strong competitiveness and that the competition in the last round is expected to be tough.

Reports indicate that next Saturday, March 24, the judges would have live telephone meeting with people through Eri-TV and that it is hoped ideas that could help the process of the ruling might be forthcoming.

It is to be recalled that in the 1st round Shingrwa contest there were 360 contestants and 100 of them passed to the 2nd round, and that 30 made it to the 3rd round and 10 to the 4th.

The third round Shingrwa contest, which commenced on 19 March 2011, would be finalized on April 15 with live Eri-TV broadcast.