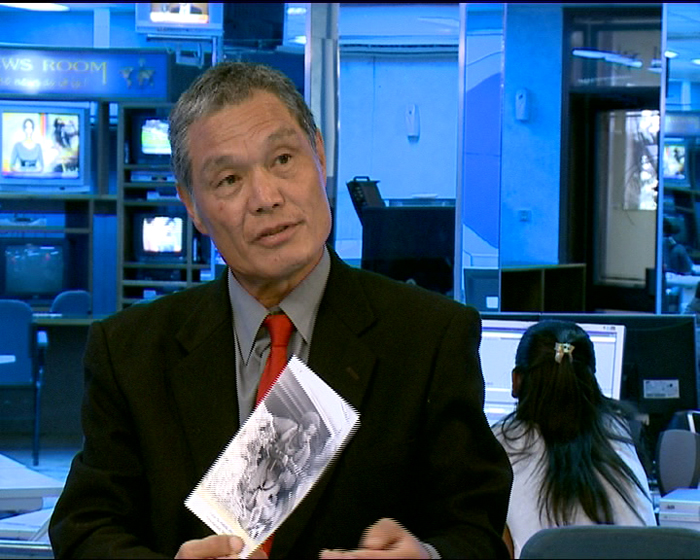 Harenabu Chiba is a Japanese professional martial artist, who visited Eritrea during the period of struggle for independence as an assistant journalist for Japanese newspaper and a karate instructor. He shared what he had experienced with the freedom fighters in an interview he conducted with Eri-Tv, Open Mic program. Excerpts of the interview follow:

Welcome to Eritrea Mr. Chiba! Please give us a brief introduction about yourself?

Thank you for having me after long years of absence. I was born in 1949 in northern part of Japan, near Tokyo.  I started karate at the age of 17 when I entered the University of Kamoshima. As a professional, I studied karate in 1975. I came to Africa as a karate teacher in 1978. I first went to Dar-e-Salaam, Tanzania, with a group of Japanese journalists. I was then given a chance to visit Eritrea as an assistant Journalist in the middle of 1978.  Now, I am based in Zimbabwe.

What are your experiences in Eritrea during your visit between 1978 and 1980?

My first visit was in 1978 as an assistant journalist. At that time, I did not know where Eritrea is situated and I have never heard of the country. During that visit, I was so very deeply surprised and I met the Tegadelti (Freedom fighters). It was a very severe time of struggle and fighting conductions. My prior experience was completely different of the situations in the battle fields. Even though I came to Eritrea as a journalist, I always take my karate training kit with me to any place. I always wanted to continue my training even if I am on the mountains. When I find any free time, I used to train myself on the rocks. Then, a Tegadalay was watching me while conducting my regular training and he was very interested.

You photographed two pictures of a freedom fighter in 1978.  What could you tell us about this?

I was a photographer for a Japanese newspaper and I took this picture of a tegadalay in Ghinda’e. It was then the first picture to be published in Japanese Newspaper.

You later decided to come to Eritrea and train the Tegadelti in Karate. What prompts you to do so?

While I was doing karate exercises, a tegadalay watched me from a far distance and reported to his superiors. The tegadalay, nick-named Burno, (Estifanos Afeworki who is now Ambassador of Eritrea to Japane) and today’s

General Sbhat Efrem among other freedom fighters came and asked me to demonstrate some. I performed for about 20 minutes breaking bricks and timbers that were hanged with strings on the air. So, Burno and Sbhat, whom I did not know what position they had at that time, were very impressed and requested me to make more demonstrations in Keren. I agreed and extended my stay for two weeks, but it was interrupted by the Ethiopian aggression. Therefore, I missed the chance for every tegadalay was very busy. However, I was very impressed by the spirit the freedom fighters had towards achieving independence. When I was asked to train the tegadelti, I expressed my willingness to do it any time.

Then after I left Eritrea, I quitted my job as a journalist and I went to Nairobi. I tried to get a work permit there, but I failed. It is at that time, a Japanese journalist from Dar-e-Salaam told me that the EPLF planed to contact me. In 1979, I again came to Khartoum and went to EPLF’s office there. I stayed in Sudan for 10 days-to-two weeks for transportation was not easily available. After three days of traveling by truck, I reached the mountains where the EPLF was based. After making agreements on what shall be prepared for the training, I visited an underground factory where karate suit was prepared based on the samples I gave. They made the suits by themselves. In everything, EPLF is self-supporting and self-standing, and a quite strong organization from the dead beginning. In brief, I visited Eritrea in 1978 as a journalist and in my second visit in 1979 as a mere karate teacher to the tegadelti which is totally a different experience from that of 1978.

Was the starting of the training difficult?

There was no facility. No flat place to conduct the training. We then checked an empty ground if conducive for the training. This was also very sandy with very sharp stones. If one stamps on it-it scratches, but I was amazed the tegadelti have tolerated it.  But, we later made it a better place and also spent about three weeks in making the preparations. We had also to prepare training kits and I gave them samples, but it was surprising it came in a very funny shape for the factory made such tools for the first time.

You had options to go somewhere else. But, you still opted to come to Eritrea. What could be the motive?

I was among Japanese overseas cooperation volunteers from 1973 to 1975 in Zambia and I stayed there for two years. The experience in Zambia as a cooperator in fishing activity was very disappointing. That was a turning point where I decided to be a professional karate trainer. When I qualified as professional karate instructor in Japan, in January 1978 I left for Africa.  Despite my instructor’s advice of going to America and earning a considerable amount of many, I decided to head to Africa for I believed Africa is a perfect place to teach karate to assist people who were suffering oppression. In the mean time, I was working in Tanzania as a karate instructor in 1978. But, a Japanese journalist in Tanzania asked me company to Eritrea.  At first, I did not know where Eritrea is and this is how I came to Eritrea in May or June 1978.

Did you find a sprit of discipline with the tegadelti in the course of karate training?

Yes, I found the tegadelti including most of the political leaders’ very disciplined. When I went to the battle fields; I was moved by the fighting sprits of the tegadelti.  They were very well organized and I felt this strong sprit as a freedom fighter is very similar with the sprit of karate fighting. That is why I decided to move to this place. Everybody could learn the sprit of karate through tegadelti. These tegadelti were self-reliant and self-supporting, who never asked for aid from outside but rather create something out of nothing. This is a good background which is completely different from the experiences of other freedom fighters to which I was very moved until now.  This is how I decided to come here some 32 years ago.
Share FacebookTwitterGoogle+ReddItWhatsAppPinterestEmail