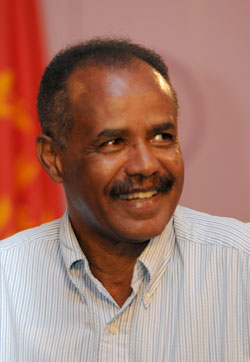 President Isaias Afwerki underscored that last week’s so-called attack is basically the US Administration’s plan emanating from frustration. The President made the remarks during an interview he conducted tonight with the national media.

Asmara 25 March 2012 – President Isaias Afwerki underscored that last week’s so-called attack is basically the US Administration’s plan emanating from frustration. The President made the remarks during an interview he conducted tonight with the national media.

The President pointed out that the so-called attack carried out by the subservient TPLF regime on 15 March on sovereign Eritrean territory was essentially the handiwork of Washington emanating from not only its failed agendas and frustrated psychology but also one based on wrong calculations amply witnessed over the past couple of years.

Elaborating on the developments and related issues, he indicated that the scenario involves a lot of details and is one segment of a bigger picture. President Isaias further underlined that there existed restlessness on the part of anti-Eritrea quarters that perpetrated campaigns over the past years in the military, economic, propaganda and diplomatic domains, all of which ended up in utter failure. In the face of such heightened anxiety following Eritrea’s bright economic prospects, the President elaborated that last week’s incident is but a result of attempts to hamper the nation’s promising economic prospects and all-round development.

Noting that the Government of Eritrea is not willing to engage in meaningless exercise masterminded by enemy quarters designed to derail the nation from its independent path, President Isaias nonetheless emphasized that numerous acts of hostility were carried out against our country. He further explained that the big media corporations funded by the CIA were employed to disseminate and fan up last week’s incident. Moreover, he underlined that they were assigned to do so on the occasion of the 10th anniversary of the final and binding Eritrea-Ethiopia Boundary Commission’s ruling on border delimitation with a view to diverting the attention of the world public.

In response to a question regarding ‘peace negotiation’ is underway in Germany between Eritrea and Ethiopia under the mediation of Qatar and Israel that has received wide coverage by different media outlets, President Isaias underscored that no such thing ever took place, nor is it taking place now and will it ever take place in the future. He also indicated that such assumptions are a continuation of acts of conspiracy. Furthermore, he stressed that such hearsay being circulated by different media outlets, is a mere public relations gimmick aimed at derailing the implementation of the Border Commission’s final and binding ruling.

President Isaias also explained that conspiracies weaved to undermine Eritrea’s development programs and their implementation have been foiled as ever by the Eritrean people inside the country and abroad.  He further called for the reinforcement of the staunch national resistance that created and continues to create miracles.