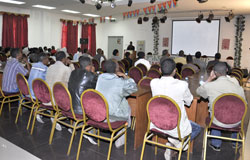 The National Association of people living with HIV/AIDS (Bidho) held its 7th regular annual meeting at the Hall of Orotta National Referral Hospital.

Mr. Mehari Woldu, legal advisor in the Ministry of Health, stated in a speech he delivered on the occasion that Eritrea is making an exemplary progress in prevention and control of HIV/AIDS infection and that the outcome is a result of the joint effort made by government institutions, the society and stakeholders, as well as the people living with HIV/AIDS.

Mr. Mehari who noted that the objective of the Association aims at assisting its members to avoid dependency and lead a stable life, stated that the association should focus on effective management and fund raising. He further assured that the Ministry of Health would continue to extend the necessary support to the Association

The Association evaluated activities carried out in 2011 and discussed the challenges and shortcomings encountered. Besides, the Assembly members put forth views on the presentations made regarding future plans of the Association.

Bidho Association was established in January 2002 under the umbrella of the Ministry of Health.