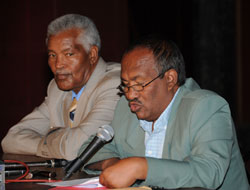 The National Eritrea Diabetics Association held its 4th Assembly on April 1 at Cinema Roma, here in the Capital.

Asmara, 2 April 2012 – The National Eritrea Diabetics Association held its 4th Assembly on April 1 at Cinema Roma, here in the Capital.

Mr. Mehari Woldu, legal advisor in the Ministry of Health, on his part explained that as diabetes involves expensive medication along with strict follow-up and care, individuals affected by it should take good care of themselves at the first hand.

The participants of the meeting put forth views on the agenda items and elected an executive committee that would serve for 3 years.

The National Eritrean Diabetics Association was set up in 1998 and has 10,000 members.