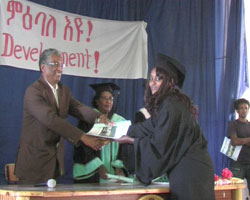 A total of 109 students who completed a one-year theoretical and practical course in Mendefera Associate Nursing School graduated with certificate on April 7.

Mendefera, 9 April 2012 – A total of 109 students who completed a one-year theoretical and practical course in Mendefera Associate Nursing School graduated with certificate on April 7.

Mr. Yosef Zemichael, director of the school, stated in a speech he delivered during the graduation ceremony in Kudo-Himbasha hall that nursing laboratory, library, cafeteria and meeting hall have already been made available in the school, which was launched in 2003. He also stated that 796 graduates from the school are serving the people through skills they have acquired.

Sister Kidusan Abraha, coordinator of the Associate Nursing School, on her part said that such schools already operational in Asmara, Ginda, Barentu and Mendefera to meet the demand for health professionals, have graduated a total of 2,360 students 62% of whom are females.

Among the graduates, Muna Abdu, who expressed conviction that graduation is a stepping stone to a taxing professional responsibility, called on senior nurses to motivate and assist them in discharging the responsibilities.