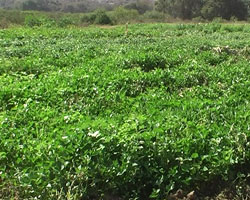 The Elabered Agricultural State disclosed that experiment made on sweet potato has demonstrated promising outcome.

Mr. Michael Teklimariam, manager of Elabered Agricultural State, explained that the experiment was made in a quarter of hectare and that 30 quintals were harvested. He further explained that the plant can play great role in ensuring food security as it is valuable for humans and as a source of green feed and called on farmers to use the plant for boosting milk production.

Mr. Estifanos Tekie, head of vegetables and crops department in Elabered State, who notified that 3 varieties of sweet potato were considered in the experiment, disclosed that the ratio of the yield was more than 1:5 and that the varieties are resistant to drought.

Ms. Ametetsion Woldezgi, who has been participating in the research, expressed satisfaction with the outcome and called on citizens to cultivate and consume the produce.

Mr. Michael indicated that the harvest thus obtained is being sold in markets in Elabered, Keren and Asmara.