An initiative that deserves appreciation 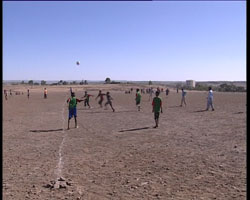 Sports especially football and cycling are part of the culture within the Eritrean society. Since the introduction of these sports activities by the Italians in the 1930s they have been widely practiced by the Eritrean youths in all major and small towns and villages. Every Eritrean youth these days uses bicycles for daily activities such as going to school or to work places. Without exaggeration we could claim that there is no village in Eritrea where bicycles are not introduced. They are properties relatively easy to own and practiced. It may be because of that that we see the cycling sport steadily progressing in the country.

For many years before independence cycling fans were talking about the old days where cyclists like Tekeste Woldu (Gegante), Giovani Massola, Salambini and others that were renowned and recognized in the international cycling sport. They were once champions of Africa and the first cyclists to represent Ethiopia (Eritrea was the colony of Ethiopia) in the Olympics games. However, as any other activities the sport was hibernated during the Derg regime only to revive after independence.

After independence the sport revived and within short period of time it skyrocketed to become number one sport in the country. Today Eritrea is the all time champion of Africa with its cyclists Daniel Teklehaimanot, Fre-Kalsi Debesay, Meron Russom and other youngsters. Every where they go to compete they are well respected and feared even by the renowned African professional cyclists.

Football on its part as it has been very popular sport has not progressed as expected and as it should be. Instead people are compelled to contemplate on the “golden” era of football in Eritrea. In the 1960s and 70s football had reached into a high level both in terms of quality and popularity. The reason, I think, was mainly because during those times there was popular participation in the sport. The clubs were well organized and they had registered fans who regularly contribute to their teams both in kind and cash. Every member of the club was involved in the daily activities of the clubs during training as well as during competition. Each team had a club in which fans and members spend their leisure time and there ideas and encouragements flow that would eventually help the development of the team.

The development of any sport requires popular participation of citizens. It is not something that should be left to the government. The involvement of the Government should only be in designing policies, arranging skill upgrading trainings, designing regulations and arranging and making follow-ups of international events in which our sports men could participate. The growth of sports could only be realized if it is organized in grass root level in which companies, organizations and individuals participate both as members and in leadership. The companies, organizations and individuals on their part should involve every member of the society as registered members and provide them access to give advices, comments and in decision making for the betterment of the teams. The people should feel ownership of the teams in which they belong.

The recent attempt being made to organize football at a grass root level is good news for the families of sports. Nurturing children at their early age with the sport would definitely bear fruit in the near future. What we need is sustainability and regular follow-up so that the activity goes uninterrupted and as desired. Individuals are also observed here and there taking initiative to offer their part in the development of the sport.

One Sunday afternoon I have been in Mendefera and by accident I went to Tipo, higher ground in the city. There I saw a lot of children playing football divided on four rough but relatively cozy grounds. I was amazed to see such number of children very concentrated and fiercely competing with each other. I was compelled to ask one of the children on what was going on. The kid led me to Mr. Sereke Habte, agricultural engineer, a coordinator and who was giving guidance to the referees and overseeing that the games go smoothly.

I acquainted my self to Mr Sereke and asked him on what they are doing with the kids. Mr. Sereke told me that there are 24 teams of different age groups competing with each other every Sunday afternoon. The sponsor for the teams and the games is Mr. Berhane Woldu who recently came from the US and is member of the Eritrean American Community in the Washington Metro area. Mr. Berhane provides the children with shirts, balls and prizes to winners. He comes every two weeks to observe the progress of the games, the discipline of the children and the activities of the organizers and referees.

I didn’t stop my inquiry of the activity and I decided to meet Berhane and ask him why and how he is involved in the activity. I met Berhane and asked him that. These days Berhane spends most of his time in Eritrea. He was always thinking in which social activity he could involve himself and contributes his part to the society. Then the idea of organizing such teams came to his mind. And as a pilot project he selected Mendefera and started there. His next similar project would be in Gash-Barka region.

According to Mr. Berhane Woldu and Mr. Sereke Habte the objective of the project is: to nurture young persons that are disciplined and value sportsman ship; cultivate model students; foster young adults that promote sport and to nurture young people that believe in forming first-class sport clubs.

They have also criteria for those who want to join. Every child who wants to join in one of the teams has to be one who loves and respects his parents and who values education; understand sport and education goes hand in hand. Short of these or who fails to deviate from the basic rules is not accepted or is expelled from the teams.

The hope is that many more Berhanes to come forward and involve themselves in such noble initiatives. It is only when we do what is expected from us that we could talk our minds about the current position of sports in Eritrea. And it is my conviction that if we do our part there is no reason why football and other sport activities would not develop in our country.