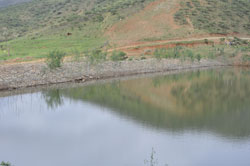 Fruits and Vegetables farmers in Mai-Aini sub-zone expressed satisfaction with the enrichment of underground-water in the area around Ona-Fer’o Dam.

Among the farmers, Mr. Tekie Gebremichael, expressed conviction that they have been facing serious water shortage in the dry seasons, and said that the dam is in a position to significantly improve the underground water in the areas of the farmlands, the result of which has boosted production.

In the same vein, Mr. Gebregziabher Aradom expressed conviction that water shortage had earlier impeded production and attested that there is sufficient water supply to carry out farming activities in the locality with full potential.

Mr. Abraha Kibreab, who asserted that the farmers were spending a lot of time to dig wells, indicated that they are now in a position to irrigate their farms through drainage.

The Agriculture Ministry’s branch in the sub-zone indicated that there exist 997 hectares of irrigated farm land, out of which 774 hectares are earmarked for fruits production, while the rest 223 hectares are utilized for vegetables and green feed farming.