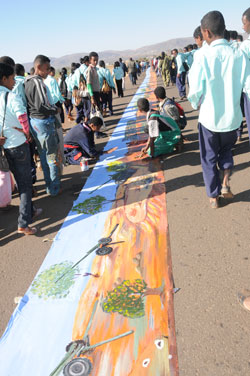 Habtom Mihretab nick named Abahagoy is the sketcher of a 7.2 km long painting that was prepared to compete and break global record with the coordination and sponsorship of the National Union of Eritrean Youths and Students (NUEYS). Besides sketching, Abahagoy also came up with a theme “pollution free world” that was chosen to be the title of the painting. Pointing out that the painting was finalized with the collaboration of a number of individuals and particularly of the more than 800 children who painted the sketches, he said that Senait Mehari, project manager, had acted as consultant and stood by his side from the beginning to the end of the project. The painting has now been registered in Guinness World Records according to the information we obtained from NUEYS. Based on this success news, Shabait has conducted an interview with Abahagoy. Excerpts of the interview follow:

When was the idea for a longest painting that would be registered in Guinness World Records conceived; and how did you choose the theme for this work of art?

The idea for creating world’s biggest painting was conceived 2 years earlier of the starting of the project. Hence, I just heard two years later that there was a plan for drawing a longest painting. Some people shared the idea with me that there was a plan for drawing such a lengthy painting and that nobody dares to put hands on it and also asked me if I could make a try.  I then asked for the guide lines and the rules I had to follow. At first, there was a perception that I, like other artists, would not dare to accept the proposal and make it a reality. But, I made a thorough study of the rules and guidelines of Guinness and I repeatedly checked it with people just to be sure. Based on that, I then prepared my proposal on how to make the painting. I believed that there should be a grand theme that embraces a good content to be represented in such 7-to-8 km long canvas. So, I came up with a global theme “Pollution free world.” I also included in the proposal that, the project could be finalized in three months if I am provided with children who would paint the sketches I made. They were surprised for finding an artist who could change the idea into reality. I decided to make it a reality at any cost for I believed that such opportunities happen only once in life time.

Were you optimistic that this painting would win in global competition and make a name for Eritrea?

Following the delivery of the proposal, I browsed the internet to see if there were suchlike paintings in terms of length and theme. I discovered that most of the paintings competed for holding a place in Guinness World Records were just focusing on measurements rather than theme or content. As a new African nation, I planned that this painting should convince the judges in all aspects be it in measurement and in content wise.

There was a bit silence on the part of Guinness World Records. Were you worried that it may not succeed? And how was your feeling at the moment you heard the victory announcement?

There was delay in giving the announcement. This is in fact due to the time it took, on the part of Guinness World Records, to make thorough and careful study of this piece of work before making the final decision. It was indeed a good work and a narrative painting where all the sequences of ideas smoothly flow to meet the set theme. This work demands extra cautiousness or else if it fails to meet the guidelines and set rules of the Guinness it would be disqualified. I was, therefore, certainly worried for we may have made mistakes that we were not aware of. However, to not let any mistake happen, I hired a manager who would keep an eye on the rules and thereby make all the necessary precautions adhering to such rules. The manager I haired played a due role in the realization of the success.

We were not worried on the length of the painting for we were still a head of others with about 1 km and 66 meters. We were also sure on its beauty. What worried us most was that we may have left some gaps in mending the canvases together. If that was so, the entire work would have been disqualified. But, we were lucky this has not happened. There are numerous requirements that could disqualify this painting from winning. For instance, there should be no traces of shoe stamps or finger prints on it. We were making all the necessary prerequisites not to make any technical error. There are countries like Philippines which failed in making a painting of such lengths. But, we succeeded.

How was the spirit of cooperation between the leaders and among the children who involved in the work and what sort of mechanism did you follow to produce a good work of art and also to finalize it in the set out timeline?

There are a number of animals sketched on the canvases- a number of birds and vegetation and there is also the sky. If the children utilized a big brush to paint a very tiny bird, they could only erase it. So I have to make sure

that they have learned how to paint and mix colors and also how to keep the proportion. Making a precaution so as to avoid any deformities in the narration of the story was also a must. The good thing about these children is that, their painting skill was gradually improving. Starting from the second km of the canvas they were painting the same way I had planned. This helped in the success of the mission. Through this, there was a smooth narration with correct arrangement of sequences. They were fast in doing it. Even though we have planned to finalize the painting in three months, it was completed in just 57 days. So, we used the remaining time for keeping the painting as clean as it should be.

Were the children good in mixing colors?

There were mistakes in the very beginning of the work. But, they were substantially improving in each km. and looking back to what they had painted at the very beginning; they were amazed and started to laugh at their own ways of painting. The skill they acquired while in the middle of the work was just amazing.

A lengthy painting from Eritrea has been registered in Guinness World Records. Are you inspired to come up with ideas of repeating such a success in other fields of art?

The potential is huge. There are a number of talented youth who could make a difference. What hinders one from participating in such activities is that for it demands huge investment and sponsorships. Hence, no one could bear losing. What has been accomplished in making this painting is in fact a good experience. If one thinks of not finishing from the onset, there would be no possibilities of finishing.

An initiative that deserves appreciation