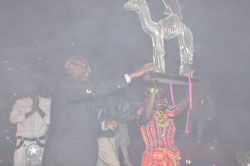 The third round Shingrwa contest that commenced on 19th of March 2011and conducted in five stages was finalized on 15th of April 2012 and was live broadcast on EriTV.

Asmara, 15 April 2012- The third round Shingrwa contest that commenced on 19th of March 2011and conducted in five stages was finalized on 15th of April 2012 and was live broadcast on EriTV.

At the ceremony conducted in Cinema Roma in the presence of Government officials and invited guests, Mr. Arefaine Berhe, Minister of Agriculture, said that the Shingrwa program has multifold advantages for it is a program with which our cultural diversity was reflected, young artists emerged, and gives impetus to the development of our national culture. He further called on the sustainability of the program.

The six finalists presented one cultural and one modern song each, and according to the verdict of the judges Ms. Meriam Shawush emerged the first star of Shingrwa contest and became the winner of special award and 100,000 Nakfa. Yohannes Habteab stood second and received 70,000 Nakfa and Simon Kahsai third and won 50,000 Nakfa.

Financial awards was also given to the other competitors who stood fourth, fifth and sixth.

A number of observers described this round Shingrwa contest unique for the first stage was conducted in the six administrative regions in which our cultural diversity was reflected and strong competitors observed.

In the first stage of the third round of Shingrwa contest there were 360 competitors, 100 in the second stage out of which 30 made it to the third stage, 10 to the fourth stage and 6 finalists.