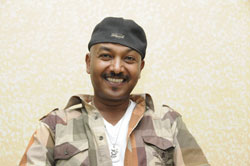 The Shingrwa contest which was conducted for 56 weeks in five stages was finalized in 15 April at Cinema Roma during which six finalists contested and Ms. Meriam Sahwush emerged the first star since the beginning of the contest three years ago. Shabit has conducted a brief interview with one of the judges, Mr. Yoel Ghide. Mr. Yoel Ghide is sound engineer for the Admas studio.

Mr. Yoel I would like to thank you for giving us time to make an interview with you regarding the Shingrwa contest in which you are involved as a judge. To begin with, what was the objective of Shingrwa and how was it initiated?

The Shingrwa contest started with the aim of finding vocalists that would contribute to the development of music in our country. The aim is to identify young people with good voice and help them develop their artistic skills. The program has also other purposes including that of entertainment. Because the program is broadcast on EriTV twice a week many people inside the country and abroad are keenly following it. Furthermore, it is educational as well as competitive. And as we observed in the third round the program was participatory.

In the first stage of the third round the program was conducted in the six regions and with that there was high participation of people living in the regions. The main objective, as I said, is to identify young people with good voice.

How was the process of judgment? Could you claim that we had competent judges that could really evaluate the contestants and give the right judgment?

Evaluating a work of art is really hard and is subjective in many instances. We were selected as judges by the organizing body taking into account our profession and experience. Barnabas is trained professional vocalist and opera singer. Hamid Saleh is also professional on the field; he studied music composition in China for four years. And I am sound engineer of Admas studio and worked on the field for about 20 years. With such an experience and knowledge I could definitely say the judges were fit to identify the winners of the contest.

Recently the final Shingrwa contest was held in Cinema Roma.. What difference did you observe of this round from the first and second one?

Initially, when we started the first round, beginning from the judges, no one had an experience on the program, because no such program had been held in this country before. We could not also claim that the organization

was perfect. We gained some experience from the first round and we did better in the second. Our experience gradually developed and in the third round the organization was better and the program went smoothly. The fact that the program started in the six regions it had an advantage both in participating the community and the increasing number of contestants. In the third round we had 360 contestants. That was, I think, the result of the organization, going to the regions where the contestants are found had an advantage in the increased number of contestants both financially and in saving time. Our hope is that the fourth round would be much better.

When we say the fourth round was unique, is that because the first stage was conducted in the six regions or do we have other reasons?

When we say the third round was unique, first as you said the first stage was conducted in the six regions and the other reason for making it unique was that we had more contestants, high number of audiences was observed and the modality of the judgment was different from the other rounds for we gained more experience. Hence, the third round was better in its organization, quality and popular participation.

There was news by the media outlets that selection of 5 best out of the 10 contestants of the fourth round Shingrwa contest is getting challenging, what was the challenge you encountered?

There was miss-interpretation in this case. It was not that we found it challenging or difficult to select the winners. When the contest reached to the fourth stage we had contestants with almost equal caliber. Such a situation rarely happens. All ten contestants had their own best quality that differentiates them from each other. And we convinced ourselves not to make mistakes. Hence we decided to efficiently use the time frame we had for thoroughly discussing between ourselves and filter each one of the contestants in different angles. Their capacity was almost the same and we were afraid not lose every one of them. Therefore, that could not be taken as challenge; we only tried to be cautious in selecting the winners. At the end of the day we came out with a star that received acclamation by the majority of the observers.

A star has been found in the third round. There are, however, some people who doubt that is the case. What would you respond to those people?

Basically the objective of the Shigrwa contest is to find a star. And we have been working in all three rounds to find that star. But we were not able to find one who fulfills the criteria we designed. As a result we were compelled to wait for three years until we find a vocalist that fulfills the criteria. Miriam Shaush was found extraordinary. She is born vocalist and we have been following her beginning from the first stage. She was progressively developing her talent. She had the perfect range, color and measurement of voice and she could sing songs of different artists irrespective of their gender. She would be one of the stars we have in this country if she properly develops the skill she already has.

Our main concentration should be on how we develop and strengthen the work we are doing and contribute to the development of music in our country. In the mean time more stars will emerge in the process.

How was the participation of the people in the third round?

The unique part of the third round was the participation of the people. People participated in huge number both inside the country and abroad. We used to receive many telephone calls and letters appreciating the organization of the contest and the results. There were also others who tried to criticize us. That was very supportive to the program. Taking into account the participation of people we decided to give 25% of the voting to the public. Hence the decision was shared by the audience. That means the audience had a say in the final decision.

What are we expecting next?

I leave this to the organizers. Our understanding is that we have the fourth round. And we are ready to conduct it with better organization and with more participation on the part of contestants and people. Until recently the exposure of artists has been confined to major cities. We want to go beyond that for there are many vocalists who have had no chance of getting the opportunity to expose themselves to the public. Even the remote parts of the country should have the opportunity to participate in such events.

Any thing you want to add?

I would only like to thank the Eritrean people for giving us their time to observe our program through the television and providing us with valuable advice and comments.