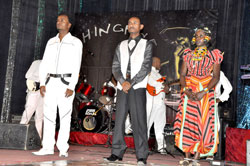 Doesn’t it seem just like yesterday when we had two seasons of Shingrwa looking for a star that couldn’t be found?

Well, after Shingrwa judges revealed that this time around the coveted  “star” was indeed found, the only suspense that hung in the air at the packed hall of Cinema Roma this past Sunday, April 15, was who would stand as the winner following the six outstanding performances in the third season’s finale.

I haven’t been update with the previous stages of Shingrwa’s third season to be able to predict which artist delivered the overall best performance. But based on some of the episodes I did manage to watch, I had quite a picture of who stood where in the competition as I waited for the anxiously awaited final stage to begin.

Coinciding with Easter Sunday, the finale for Shingrwa 2012 was, as both of its previous season finales, staged at the elegant and comfortable Cinema Roma Hall. Although I could have stayed at home and watch the whole thing live on television, I opted to go and witness the whole drama and excitement in person. There’s nothing like a first-hand experience, after all!

After the opening statements from the Guest of Honor and one of the judges respectively, the six finalists presented each one modern song.

Sudanese-born Simon Kahsay kicked off with a mellow rendition of one of Taniko’s hit songs. He was well accepted by the audience but not any better than the contestant who succeeded him on the stage. In fact, the moment Meriem Shawush got on stage and started singing in a highs-spirited manner, loud cheers accompanied her all the way through her song.

The enthusiasm of the audience kept momentum with Nur Osman and Abraham Haile, the singers that followed, but got to the highest level with the two final singers, Eden and Yohannes (Wedi Kerin). From the number of people who by then were standing on their feet, waving big banners with pictures of their favorite contestant, and cheering and shouting out loud from their hearts, Eden and Yohannes were probably the two singers that had the biggest number of fans in the audience.

If that was cheering and support at its greatest, then words can hardly describe the thrill and excitement that ensued as the six Shingrwa finalists returned once more to the stage for a traditional song.

Each contestant tried its level best for an astonishing performance. Viewing the audience’s reaction, which was also my opinion of course, I dare say Meriem was unequalled in her stage movements to her animated song. Abraham and Wedi Kerin also did a wonderful job with their guaila selection. Nur Osman and Eden’s upbeat choice of songs saw them perform better this time around while Simon’s rendition of Habibi Teal, earned him a big hand from the hall.

In the brief interlude where the three judges retired to deliberate on who would walk away with the coveted  title, if found at all, everybody in the audience, myself included,  hardly paid attention  to the  comedy show presented by comedian Hagos (Suzinino) but was instead busy predicting which artist would stand in which place.

The consensus was that Meriem, Yohannes, Eden and Abraham would definitely fall within the top winners’ circle.

Judgment time came. Yoel Ghide, one of the three Shingrwa’s judges, said that the judges had “made careful and meticulous considerations as to who would be fit for the title of Shingrwa Star,” and to the utter joy of all watching and listening, he said that this year they indeed found the ‘star.’

But the suspense was not yet over. The host called all contestants to the stage and after receiving a closed envelope from the judges, he announced the bottom three starting with fourth place winner Nur Osman. Eden Kesete and Abraham Haile followed as fifth and sixth place winners. The announcement was not well received by the audience. Dissatisfaction was highly visible, and the murmuring and shouts of disbelief echoed around the hall.

Shingrwa was a competition, and as in every competition, there have to be winners and losers. These three composed the latter group and were handed out monetary prizes of 5,000 Nakfa, 3,000 Nakfa and 2,000Nakfa respectively from the Director General of Eritrean Television, Mr. Asmelash Abraha.

When the second envelope, containing the name of the new star, was opened the tension and anxiety got indescribable. As previous predictions were not fulfilled, at least not to the maximum, the audience waited impatiently. Most were almost confident that Simon would be the second runner-up. And the assumptions were grounded. Simon indeed became the second runner-up, winning 50,000 Nakfa in monetary prize and a round-trip air ticket to Sudan (his birthplace, call it coincidence or not).

After Lorenzo, the show’s host du jour, proclaimed Meriem Shawush the winner of the contest and the first Shingrwa Star, pandemonium hit the stage. Meriem’s fans got on stage and the host was barely audible as he called out Yohannes’ name as the first runner-up and winner of 70,000 Nakfa in cash and round-trip air ticket to Dubai.

The guest of honor, Minister Arefaine Berhe, handed out the prizes and then bestowed a sparkling glass miniature statue of a camel with a star on top to the beaming Meriem, who surrounded by her family and fans, was literally incapable of singing one of the tunes that brought her victory that day. She went home with the coveted title, a round-trip air ticket to Paris, France, and of course a 100,000 Nakfa richer.

Most of the people I met outside the Cinema or elsewhere that day were not totally complacent with the decision. Most had hoped Yohannes would win the title this year. He was himself convinced that he would win. He was in fact heard as confidently saying that he had no doubts that he would own the title.

You can only imagine his disappointment.   Pardon me, but I must say he had it coming.  In his interview the day before, he appeared to be a little too full of himself.  Many disapproved of that seemingly arrogant behavior, particularly coming from a young artist whose future still lies bright ahead. Stardom in Eritrea is earned and never handed, and Meriem, against all expectations, earned her victory. One thing however remains true: the six of them were dynamic singers and each delivered great performances.  I am sure we’ll be hearing many great things from them in the future.

The Eritrean music talent show, Shingrwa, which  in  the  Bilen language means “tomorrow’s star,” was launched in 2007 in an effort to explore the talent pool in the country and in the process provided a platform for young and talented stars who may have lacked the opportunity   to  explore their potential.

While the importance of music in preserving and promoting the culture and identity of a society is obvious, music in Eritrea has not only highlighted the people’s culture, but also shaped and immortalized the different stages in their history.

The Minister of Tourism, Ms. Askalu Menkerios, during her speech at the show’s second season’s finale, had put it plain and simple:

“Music and other cultural activities played a decisive role in turning Eritrean cultural diversity into a blessing rather than a curse as is the case in most parts of the world.”

And now Shingrwa has opened a new door in the endeavors to promote and shape the art of music in the country. Its popularity among Eritreans of all ages has enabled many of the contestants to have a broad fan base rooting for their victory.

“Just by being on the show the participants are able to familiarize themselves with the public as singers,” Barnabas Mebrahtu, one of the Shingrwa judges had once said of the show.