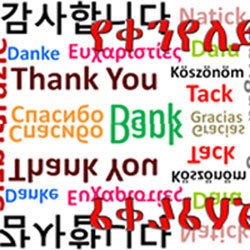 As with most Diaspora communities, Eritrean parents all over the world are often faced with the dilemma of how to teach their children their mother tongue language. Some even question whether they should, citing difficulty for the child and academic problems as concerns. The following article comes highly recommended from an Eritrean national residing in the United States. The article first appeared in ELEM Magazine under the title Bilingualism: …The Best of Both Worlds. The writer, Mahta Tewolde, has tried to delve into the concerns mentioned earlier and present the far-reaching benefits of raising a child bilingually. It’s a good and informative article and I hope you enjoy it.

I was raised bilingually. Born in the UK, my first language was Tigrinya, which I learnt at home with my parents; I mainly learnt English from nursery school onwards. As a result, I am fluent in both languages. I often start a sentence in Tigrinya and find that by the end of the sentence I have swayed between English and Tigrinya more times than a formula one driver on a figure eight shaped racecourse. It is often the same in reverse: “I’m going to TiQlil my hair now, gin, I’m going to wilwil the floor later”.

There have been times when I’ve momentarily forgotten a word in either language and had to pause to translate (how do you say TiQlil and wilwil in English again?). Are these problems? Are they indicators of the difficulty for a child to grasp more than one language in their formative years? In fact, neither is true.

Being able to move fluidly between two languages is something I’ve always found enjoyable; I feel that the whole experience of growing up speaking two languages placed me in the privileged position of seeing the world from several perspectives as a child. Today, there is an increasing wealth of research, which suggests that there are academic, emotional and social benefits to bilingualism when the child is taught from a young age.
Barriers to bilingualism in children

It is an often-heard argument that young children will find it difficult to cope with more than one language, as they will be confused and will end up not knowing either language well. Or, that their intellectual development will be compromised by the extra burden of juggling two (or more) languages. A few generations ago, educators and parents supported this view in the mistaken belief that languages were held separately in our brains and that the more you learn of one, the less you could retain of the other.

In fact, research has shown that up until the ages of 10-12 a child’s brain is constantly creating neurological connections and has the capacity to absorb languages easily. This is in contrast to learning a language as a teenager or adult, when the brain has to work harder and try to find ‘storage space’ for the new information.

Difficulties with children taking on another language at a young age are more likely to relate to other factors: the family’s integration into their country of residence; how the child is able to handle being bi-cultural; and the parents’ attitude to the language (for example, the child sensing that their parent values English over their mother tongue).
I know several families who said they wanted their children to speak their language, but who unwittingly gave the impression that it wasn’t as important as English, by mainly speaking the latter. Some parents chose not to speak their language because they wanted to improve their own grasp of English. Some parents even questioned the use of teaching their child a language which is only spoken by a minority of people in the country they live in.

How the child views the language and what they associate with it can also interfere with their learning. A family acquaintance spent her formative years refusing to speak Tigrinya, after an early start in speaking it, because she associated it with older people (her parents, grandparents etc).

According to The National Languages Institute of Australia, bilinguals appear to have improved flexibility in thinking and concept formation as well as being quicker in their understanding of the subject matter.

A Canadian study from York University indicates that being fluent in a foreign language could help children learn reading faster. Other studies suggest it could give them a head start of up to 2-3 years.

Bilingual children tend to achieve slightly higher results in tests and exams according to research from bilingual education systems in Canada, the USA, the Basque country and Wales. Some research also points to better results in Maths and Science in particular.

As they have already learned to adapt to one language, children find it easy to pick up another. Being bilingual as a child also makes it easier for them to learn a new language as adults.

Bilingual children tend to be more empathic, tolerant, and open-minded. They also tend to have more interaction with people by virtue of being bi-cultural, which can help them in learning to socialize.

The child can form better relationships with extended family (i.e. grandparents, aunts, uncles), particularly those who don’t speak the other language. Another dimension to this is the potential benefit in a child’s relationship with their parents. A child, who can hear their parent express themselves in their mother tongue, will no doubt obtain a clearer picture of their parent’s thoughts and feelings.

Languages can give access to expressions of culture such as: sayings, stories (oral history), literature, poetry, films and music. They can also allow a greater understanding of the different thoughts and behaviors of each culture.

Research shows that bilinguals can earn more money – even if the second language they speak is not itself desired, the fact that they have that extra skill is often desirable to employers as it can show adaptability and aptitude for learning.

Knowing another language can give children a sense of achievement. This will no doubt be amplified if they can see that their parents also take pride in their language.
Many experts agree that these benefits – particularly those relating to thought and education – are more likely to be gained from ‘Balanced bilingualism’. It is better for a child to learn both languages side-by-side and try to achieve equal fluency.

Recognition of the vast benefits of bilingualism has in recent years led to an increase in monolingual parents, in countries such as the USA and the UK, employing au pairs who speak a different language.
English-speaking households are desperate for their children to learn French or Spanish or Mandarin – any language, as long as their child is able to learn more than one and has the opportunity to reap the benefits later in life. A lot of parents who only speak one language are even resorting to teaching their children a second language themselves, for the same reason.
I am grateful to my parents for taking the effort in teaching me Tigrinya as it has enabled me to form close relationships with relatives and to feel more involved and at home whenever I visit Eritrea (albeit in a visitor from abroad type of way).

I have been able to converse and connect with my grandparents in a way that wouldn’t have been possible without speaking the same language. I am also grateful that I don’t have that “I wish I could read the road/shop signs and not have to ask anyone I come across whether they speak English before asking for directions/assistance” feeling that I have whenever I visit most other non-English speaking countries.
Raising a bilingual child is much easier when the child is young – it gets more difficult to obtain the same benefits when they are in their teens. Although it may be a difficult task to undertake, it’s clear that the many rewards make it well worth the effort.