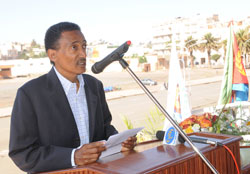 International Wokes Day (May Day) was today marked here in the capital under the theme “There is nothing unachievable through labor and laborers.”

Asmara, May 1, 2012 – International Wokes Day (May Day) was today marked here in the capital under the theme “There is nothing unachievable through labor and laborers.”

The Secretary General of the National Confederation of Eritrean Workers (NCEW), Mr. Tekeste Baire, said in a speech he delivered during the observance at Bahti Meskerem square that various development tasks could be accomplished in all corners of the country on the basis of the principle of self-reliance among the citizens and those playing leadership role. Elaborating that the workers’ role is the essence of the principle, he underlined that the precondition of human resource development and promotion of integrated endeavors are timely obligations of the Confederation. He further stated that the NCEW has accordingly charted a strategic plan in accordance with the set goal.

Also speaking on the occasion, the Minister of Labor and Human Welfare, Ms. Salma Hassen, said that the Government has launched a number of programs with the goal of ensuring social justice, and that various endeavors and discussions have been conducted to secure favorable industrial environment.

Likewise, explaining that the secret of success and improved livelihood are workers, professionals and innovative people, Mr. Yemane Gebreab, Head of Political Affairs at the PFDJ, explained that the Government is working with a bold concern for its citizens in creating jobs, nurturing enthusiasm in education and professionalism, as well as the improvement of the people’s livelihood. He also commended the impressive contribution of the Eritrean people in the nation-building process.