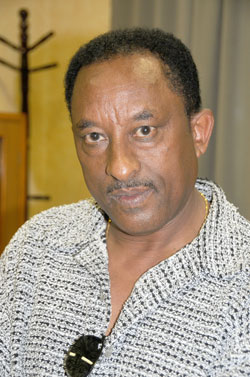 Stifanos Abraham (a.k.a. Zematch) is one of the renowned veteran artists in Eritrea. He has been in the professions for more than thirty years. Stifanos joined the struggle for Eritrean independence. He was wounded in 1977 and lost one of his legs. Shabait has made short interview with Stifanos and excerpt is as follows.

Mr. Stifanos Abraham, I would like to thank you first for being willing to conduct this brief interview with Shabait .com. To begin by question, when were you involved in the field of arts especially of that of a singer?

I remember when I was an elementary student, as a kid, I used to recite poems and rhymes during school ceremonies like school closing ceremonies. I had strong inclination towards singing. I remember when we enter into our class room the teacher asking me to start the rhymes. I also remember during that time there were different private music bands in Asmara like Asmara Theater Group, Venus Club, Rocket, Jaguars, Zerai Deres and others. We used to repeat some songs from these Music Bands, especially of Osman Abdulrahim, Alamin Abduletif, Atewebrhan Segid. When I reached junior high school I used to sing whenever I find the opportunity. Whenever my peer groups have an occasion or an event they used to invite me to sing, and I was delighted to do that. That was a good opportunity for me to develop my skill as a singer.

1974 was the coming of the Derge regime of Ethiopia to power and also the year in which the Eritrean youths were inundating to join the struggle for independence. And as a youth I had the same aspiration and with that I went to join the liberation army. In the field we used to organize entertainment programs whenever we find the opportunity. Those entertainment programs and other occasions were good events for me to perform. Performing art in the field was group responsibility and those who have the talent take the major share of performing. Those occasions helped me a great deal to develop my skill in the field of art.

After I was wounded and no more with the combat units I got the opportunity to join the 8th round of School of Cadres. For the first time I performed there songs and poems without the help of music instruments. After I finish my education at the School of Cadres I was assigned to the Red Flowers Music Group.

What was the song that convinced you that you could be really a singer, a professional singer?

It was Hijum. Even though I had some songs I performed at the School of Cadres, this one was really my first song that revealed to me that I, Zematch, could be an all out singer. The song was released during the strategic withdrawal and still is remembered by many combatants who were in the situation.

So from that onwards you were convinced that you can be an all out singer?

Yes! Almost all the lyrics and melody of my songs are mine.

What would you say on the difference of songs in our country during the time of armed struggle for independence and to date?

If you look at our songs during the armed struggle for independence and now they are different. We can see to it with the time and the psychological make up of the people who were in the field and after independence. Both had their own advantages and challenges. During the armed struggle for independence no one was paid to perform. You are not told to sing. It was every ones initiative and there was strong will to contribute what ever capacity you possess. There was no private ownership of lyric or melody, it was a team work. Every member of the music group produces something he/she thinks would help the group. Say for example one song includes five stanzas and every stanza could be written five members of the group. The molodies were also the same. Every member had the opportunity to practice his/her talent in terms of composition, lyric and melody. That was how we were producing our songs. The sole aim was how to produce a best song that could hit the minds of the audience. And in the final analysis the aim was to motivate and raise the moral of the freedom fighter and the people towards the liberation struggle.

After independence especially after 2000 music in our country has become business. Money is involved with every music production. There are many people involved in producing lyrics and melody. It is a competition to make money. And in the process some emerge successful and make more money. All in all I can say that if we are given more importance to making money it hurts the development of music.

More over, there is no team work. The existing technology does not encourage team work. There is also no psychological make up like that of during the armed struggle for independence. One produces his own lyric and melody or asks some one to produce for him and goes to the studio and records his song with the help of the technology available. The director or the sound expert has nothing to contribute; it is the computer which does every thing from adjusting sour voice and harmony of the instruments. There is no need to practice here. This may differ from individual to individual. I myself I don’t go to the studio with out practicing my songs for several weeks. What I am talking about is the general inclination of musicians in this country. This is one aspect in which we are lacking to produce lasting songs.

What measures do you think should be taken to reinforce and develop music in our country?

Art is work of the mind and it depends on the will of the producer. If it is the other way round the producer is not expected to produce lasting production.

What do you think is the contribution of Shigrwa program in the development of music in this country?

The Shingrwa program is a program which could be advanced from time to time with experience. And I believe it is a big program in which emerging musicians in this country could get the opportunity to expose themselves to

music and songs. If we look at the program from the first round to that of the third, we witnessed a big difference. The second round was better that that of the first and the third better than that of the second. The organizers gained more experience in the process. The program had some set backs that could be improved with experience.

The positive aspect of the program is that the youths got the opportunity to discover their talent.

In order to make Shingrwa one of the best programs there are some measures that should be taken. First it should be more participatory. Different people with knowhow in the field should be invited to participate in giving verdicts and in organization. There should be consultation with different experts in the field. I take Shingrwa, however, as a positive and important program for it is giving the opportunity for many young people who otherwise would not have the chance to discover their talent.

Before the last stage of the Shingrwa contest, the ones who passed to the final stage were provided with short training programs, do you think here the need of establishing School of Music?

Definitely! It is the knowhow that we are providing the youth. Education is vital for any field. Without education one goes no where. Establishing School of Music is not something that should be left for time. The sooner is the better.

Some people say that Zematch is an all time singer. He fits with different generations of singers. How do you manage to do that?

I am not the only one. But talking about me, it is my inner urge that pushes me to do more, to learn more and set my mind in a way to convince myself that I could do it. I am always hopeful. And with luck I am among the generations of singers. However, I would not claim that I have extra power; I say I am gifted to stay with that.

What is your coming program?

My short term program is to produce DVD of ten songs. I am on the process of finalizing it. I am also doing a song for the Independence Day celebrations. I have different programs and God willing I would be able to do them.

Any thing else you want to say?

I would like to provide my piece of advice to the young musicians that they take education seriously. They have to learn and read. With education and reading we could improve the quality of our production. We should not allow songs from out side overtake our music production.

I would like also to thank the people of Eritrea for the encouragement they always give me. And I would like to every Eritrean HAPPY INDEPENDENCE CELEBRATIONS.