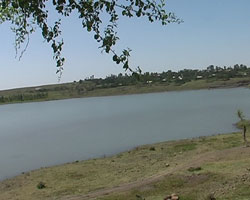 Share
Sememo Dam has a capacity to impound around 200 Million meter cubic of water. In late 2010, infrastructure for drip irrigation was put in place on a vast area that would be cultivated under this dam. And as of the 3rd month of 2011, drip irrigation based cultivation has been started as a pilot project. Since then, around 80,000 hectares have been put under cultivation. As opposed to prior traditional farming practices in areas around the dam, there are plans to expand the drip irrigation project to utmost level of cultivation capacity; of course this would be realized once all the necessary infrastructural equipment is put in place. There were numerous challenges on the onset of the project and some of them have not been addressed to date. But, Eng. Gebreselasie Semere, irrigation expert said,  “we have been very flexible to harvest three times a year, despite the challenges.”

Prior to the introduction of advanced farming activities, training aimed at enhancing the know-how on operating the new farming equipment and ensuring its sustainability was offered to beneficiaries around the area. Besides, techniques of crop protection that include weeds elimination and making proper use of pesticides were also part of the training.

As the farmers around the dam were solely relaying on traditional farm practices, they were less confident to cultivate their farm lands through irrigation system which utilizes very tiny drops of water. But, there have been a change of attitude for they have practically witnessed the benefits of such advanced farming technology. This time, the farmers have good knowledge of the benefits that could be obtained through utilizing such advanced technology. And, therefore, they have been encouraged to exert more efforts for they start to harvest three times a year which is indeed a grand achievement for them. But, there exists lack of spare parts which could pose threat for its sustainability.

The major pushing factor towards the success of the project is that, agricultural experts were engaged from the very beginning to make sure that all requisites are provided.  This enables the experts to realize the deficits and there by overcome any challenge through flexible mechanism.

Since the irrigation based farming is a pioneering experience for the farmers in this area, they were at first very reluctant.  So it demands extensive discussions to convince them that they could be largely benefited from judicious utilization of water resources. Through irrigation based farming, the farmers around Sememo have been cultivating vegetables and a variety of crops. It is important to notice that the amount of water the dam impounded could suffice not only for farming activities but also for domestic uses.

Due precaution was also taken to make sure that the amount of water supply could sustain the agricultural project and at the same time would not pose threat to the provision of potable water. Thus, the 80 hectares that have been put under cultivation is in accordance to the studies conducted prior to the implementation of the project. And its sustainability is very much guaranteed.

However, marketability of the farm productions is of a higher concern. Owing to the availability of good infrastructure and also taking the advantage of the main route that passes along the farm area, there is a huge possibility

to transport the harvest to any market around the area such as Adi-Quala sub-zone, Mendefera and Senafe in the Southern region or to Asmara and its environs and also to Gash-Barka region such as to Teseney.

All the inhabitants around Adi-Quala sub-zone have been at large beneficiaries of agricultural harvest. Besides securing the daily needs of the inhabitants around the dam, the implementation of drip irrigation system has enabled the farmers to develop a new outlook. Farm practices through the utilization of drip irrigation system have now been expanded in the Adi-Quala sub-zone. Such infrastructure, for instance, has been introduced in Geza-Keren on about 10 hectares ahead of that of Sememo. Likewise, this system was also introduced earlier in Mai-Tsebri Nursery. This advanced technology which the Government introduced to the area has been a great leap forward. It is indeed a good experience and opportunity which paved a way for capable farmers to introduce such technology.

What is more is that such technology has also been introduced in Adi-Bahro and preparations are under way to cultivate around 20 hectares. But inadequate supply of electricity has still been a major challenge that hindered the project’s progress. It is undeniable; however, such development helped the farmers around Adi-Quala sub-zone develop new insight. The Ministry of Agriculture has also been playing an essential role in familiarizing the farmers in the areas with the agricultural advances and stands by their side to assist them in every move when the need arises.

Mr. Tekleweyni Weldeghebriel, Agricultural expert from Mai-Lafo, Administrative area is highly appreciative of the Government’s endeavors in improving living standards of a number of families that have become beneficiaries of the project. According to the assessments they conducted, there was bumper maze harvest and they have realized that soil textures of that area is highly conducive for cultivating a wide range of vegetables and variety of crops. Agricultural experts in Adi-Quala sub-Zone said that sample test conducted in Halhale Agricultural Research Institution enabled them learn that the soil textures on the area are free of acidity and salt. Farming activities continues until May based on supplementary drip irrigation system but is discontinued to make maximum use of the rainy season.

Mr. Bereket Habteslasie, head of Agriculture Ministry’s branch office in Adi-Qual sub-zone, said that the infrastructure put in place under Sememo Dam is worth 10 Million Nakfa. Government’s expectation in implementing the projects is to boost production through repetitive harvests. So, in two rounds of harvest, Mr. Bereket said that all Government’s expenses have been covered.

Two farmers’ associations, Smret and Selam, are now engaged in farming activities that are embraced in the Sememo Project. Beneficiaries of this project are mainly women farmers. As the incomes obtained from the two harvests have covered the invested budget, from now on wards the project would become a lucrative business. The Sememo Agricultural project has not only confined in cultivating vegetables and crops but it has also been cultivating animal feed for the Southern region cooperative association. If electric supply is secured, such projects would also be introduced in other sub-zones of the Southern region. “We are looking ahead to conduct farming activities in an enhanced manner, provided that all the deficits we have been encountering would be alleviated,” Mr. Berkeket said.