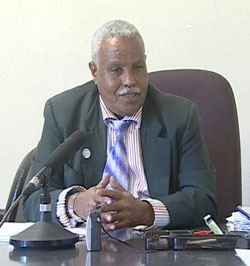 Eritrea is one of the very few countries in Sub-Sahara to effectively control the prevalence of malaria. The achievement has received acknowledgement by the UN World Health Organization. Our colleagues from the News Room have conducted an interview with Dr, Tewolde Gebremeskel, head of Malaria Control at the Ministry of Health in connection with International Malaria Day. An excerpt of the interview follows.

Dr. Tewolde, I would like to thank you first and to begin my question, what is the policy of the Ministry of Health regarding malaria?

The policy of the Ministry of Health towards malaria, especially from 1999 onwards, is that with the five years plan of implementation to reduce the prevalence of malaria to the lowest possible. Malaria should not be a problem in this country. The first five years program was from 2000-2004 and that was to reduce malaria prevalence by 80%. From the day one of the program we worked hard in cooperation with our partners. This was in the first five years program. Currently we are working on the third five years program. It has been 12 years since the launching of the program. We are now not working to reduce the prevalence of the disease but to make it zero sum prevalence of it. The guiding principle of the World Health Organization (WHO) is also to eradicate malaria prevalence from the face of the world.  And Eritrea by the standard of the organization is in good track. It is our conviction that it will not be long for malaria to become history in this country.

How was the prevalence of malaria after independence? Could tell us stage by stage?

In the first years of independence malaria prevalence in this country was in its highest stage. It was one of main killer diseases. The number of health facilities was also in their lowest number, they were almost non-existent. The capacity of the Ministry of Health was also weak. But after we started to document malaria incidents from 1995, there were 300,000-400,000 malaria patients. Now the prevalence is between 20,000 and 30,000. Regarding the death rate we could still only talk from the time we started documenting. In 1998, for example, around 500 people died from malaria and now not more that 10-12 people. In 2011, for example, the document reveals there were 12 people who died from malaria. With this difference in numbers one could see how much malaria prevalence has been reduced in our country. We now could go from working to reduce the prevalence to a higher stage. And that is to completely eradicate malaria.

What is the prevalence in terms of percentage currently?

The effort for reduction the prevalence was conducted in stages. To date we could claim that the malaria prevalence has been reduced by 90% and the death rate by 95%. The outcome is encouraging but still we are convinced that we should work hard.

Could you elaborate to us the activities conducted to reduce the prevalence of malaria?

From 1999 on wards we conducted concerted activities. Rigorous awareness raising campaign was made in partnership with government and public institutions and we were successful. People understood and widely

participated in the endeavors to combat malaria. People understood that the first measure was making medical check-up and get medication. The other thing is taking preventive measures like using impregnated mosquito nets, and for that the Government distributed substantial number of the nets to public. Currently one hardly finds a household with out an impregnated mosquito net, especially in the areas known for its prevalence. The other important aspect is to clean the environment and deny the malaria mosquito the breading ground. The third alternative is to spray insecticide. We also do follow-up and inspection activities. The spraying of insecticide is conducted in two regions, Debub and Gash-Barka, where there is high prevalence of malaria. These are our main strategies for controlling malaria. And we say we were successful in all aspects.

How the participation of the people in those activities?

The participation of the people is very satisfactory. They accept what the medical personnel tell them and participate in every activity they are asked to participate. They have belief on the medial personnel around them.

Who are the vulnerable members of the society to malaria infection?

The vulnerable members of the society to malaria infections are pregnant women, children, especially under 5 years of age, and people who travel a lot to places where the prevalence of disease is high. And we are engaged in advising them to take preventive measure like making regular medical check-up and using impregnated mosquito nets where ever they are.

What message do you have to convey to the society?

Our program is huge and we could say we have done a lot at national level. The achievement we have already registered should be preserved. Our next step would be to eradicate malaria prevalence 100%. To do that there is the need of the cooperation of the society. And I urge them to continue what they are doing so that we realize our intended goal.