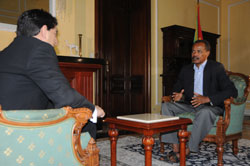 In interviews he conducted today with various media outlets in connection with the 21st anniversary of Independence Day, President Isaias Afwerki underscored that the tasks accomplished over the past 21 years assert the Eritrean people’s bright future.

Asmara, 17 May, 2012 – In interviews he conducted today with various media outlets in connection with the 21st anniversary of Independence Day, President Isaias Afwerki underscored that the tasks accomplished over the past 21 years assert the Eritrean people’s bright future.

In the interviews with Press TV, VOA and the Swedish newspaper Aftonblandet, the President pointed out that the nation’s main objective in the post-independence period focused on creating the groundwork for genuine independence keeping intact its chosen path of development and without being perturbed by external acts of hostility and pressure. He further elucidated that the country has succeeded in creating firm ground for the achievement of still higher progress, and that it would continue to exert unremitting endeavors for lasting victory through mobilizing resources and capacity, particularly achieving food security.

As regards humanitarian aid, President Isaias noted that in today’s world the so-called “humanitarian assistance” is characterized with disguised external political agendas. Taking this into account, societies need to guard against falling into such a trap, and thus rely on self-reliance, he elaborated.

Replying to a question whether the non-implementation of the EEBC’s ruling on border delimitation for a decade is a cause of worry for Eritrea, President Isaias underlined that “a disturbed party does not wait for 10 years.”

Although the issue has not so far been resolved on the ground due to the obstructionist role of the US administration, Eritrea is not at all disturbed for the issue has reached solid legal conclusion. However, the fact that a lot of

opportunity for both the people of Eritrea and Ethiopia has been wasted as a result of Washington’s direct or indirect acts of interference is a cause for worry to Eritrea, he asserted. The President further voiced conviction that provided the US administration puts an end to its acts of interference, not only Eritrea and Ethiopia but also the entire Horn region stand to benefit from peace, stability and prosperity.

Regarding the uprising in the Arab world, President Isaias explained that such a development is part and parcel of the global crisis witnessed around the world, including the US and a number of European countries, the main cause of which is the monopolistic stance of the special-interest forces.

On assertions by major international institutions saying that Eritrea is registering noticeable economic growth, he underscored: “As far as our side is concerned, we measure economic growth on the basis of social service facilities and infrastructure put in place on the ground, as well as the upgrading of our people’s standard of living.”