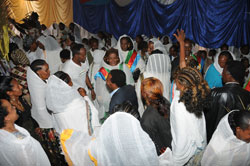 Celebration of the 21st Anniversary of Independence Day began with different activities throughout the country on 17 of May 2012. Asmara is decorated with twinkling lights and is ready to embrace the big day, 24th of May 2012, the day the people of Eritrea were free once and for all from the yoke of colonialism and the day from which they started breathing free air. From that day on wards the Eritrean people started to walk heads high with nobody to get afraid of and no body asking where one goes or pass by. The Independence Day celebrations will continue for about ten days with different activities including live musical shows, carnivals, activities that would include the youth and students as well as people from different administrative areas have dedicated one day of the week of the celebrations to come together under one roof in their respective areas and celebrate the day.

With all the fanfares, dancing on the streets and entertainments in commemoration of the Independence Day there is always one memory among all the Eritrean people’s minds that goes with every step of events of the celebrations. The 30 years of bitter struggle for independence and the loved ones that paid their dear life for the day to happen. Every one, even those who were born after 1991, knows that this independence was not handed to us with a gold plate. Every Eritrean has paid his/her son/daughter, his/her brother/sister or a near by relative. Every one of us also knows that had the people of Eritrea been not betrayed by some of the super powers of the day Eritrea would have gained its independence by peaceful means.

The first betrayal and deceit the people of Eritrea never forget from the international community was, I like to repeat it several times for being it the first and still lingering in our minds and as such being repeated in different forms.

“From the point of view of justice, the opinions of the Eritrean people must receive consideration. Nevertheless the strategic interest of the United States in the Red Sea basin and the considerations of security and world peace make it necessary that the country has to be linked with our ally Ethiopia.” John Foster Dulles – US Secretary of State

That statement by the then US Secretary of State was the venom in our history that eventually condemned Eritrea to remain under the colony of Ethiopia that was by far backward from it. And by it was the rude decision

that brought about the thirty years of bitter struggle and scarifies of many Eritreans, both civil and combatants. Had it not been the case all the suffering, the blood that has been paid would have never happened. Eritrea’s case might have been decided similar to those countries under Italian colonialism, Libya and Somalia which were granted their independence by the international forum.

All the human toll and material lose during the armed struggle for independence did not remain in vain. The gallant freedom fighters outdoing and crushing the huge Ethiopian forces armed to the tooth, that was considered one of the strong armed forces in sub-Sahara Africa, came out victorious on 24th of May 1991. And that is the day that every Eritrean is celebrating wherever they are in jubilation and remembering the heroes and heroines who made us see that day.

The coming 10 days, it has been already two days since the start of the celebrations; people would enjoy their fruit of struggle and make their pledges to defend their Homeland from any conspiracies and hostilities where ever they come from.

Happy Independence week for all Eritreans!