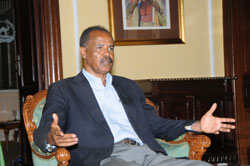 President Isaias afwerki underlined that the Eritrean people’s persistent resistance against open enemy conspiracies since independence is the raison d’être of their victory.

Asmara, 18 May 2012 – President Isaias afwerki underlined that the Eritrean people’s persistent resistance against open enemy conspiracies since independence is the raison d’être of their victory.

The President made the salient remarks during an interview he conducted today with the national media outlets in connection with the 21st Anniversary of Independence Day. The interview mainly focused on the nation’s development programs and economic progress vis-à-vis the challenges and objective situation, as well as regional and international developments. He further explained that anti-Eritrea quarters left no stone unturned with a view to not only blocking but also impeding the Eritrean people’s forward march. Despite this, however, the political, economic, military and security enemy designs encountered have ended up in utter failure thanks to the awareness and staunch resistance of the Eritrean people inside the country and abroad, the President underlined.

As regards conspiracies targeting the youth, he pointed out that the prevailing awareness of the Eritrean youths far exceeds the attempts weaved to cripple and drain their overall potentials. President Isaias further noted that the Eritrean youths need to demonstrate continued vigilance against enemy quarters.

On the development drive in the Homeland, he explained that the leadership has managed to clearly map out the cherished goals in terms of time, labor and energy, besides realizing the need for demonstrating persistence and the requisite resourcefulness based on self-reliance as regards internal capacity which nonetheless needs to be reinforced, the President elaborated.

Furthermore, President Isaias gave extensive briefings regarding regional and international issues in general and the objective situation in Somalia, the issue of both Sudans, the Arab uprising and the Iran-US confrontation, among others, in particular.