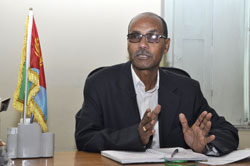 It has been 21 years of pride and dignity and of peace and tranquility and also 21 years of full fledged progress.  This year’s Independence Day Anniversary would be celebrated under the theme “Eritrean Independence: Core of Dignity.” Below is excerpt of the interview conducted with Mr. Tesay Berhe, Director of the National Holidays Coordinating Committee in connection with the celebratory event of the 21st Independence Anniversary.

What are the preparations that have been made in connection with the 21st Eritrea’s Independence Day Anniversary?

The celebratory programs have already started since 2 May 2012 with varied shows that have been staged from primary through secondary schools. Bearing in mind that the feast belongs to the coming generation of youths, all sorts of artistic, cultural, innovative and renovative and also other sorts of competitions have been regularly conducted on daily basis in two schools in the morning and after shifts. Such shows and competitions will continue until May 19. This program would be concluded on May 20 by a general knowledge competition that has been conducted among secondary schools of the Central region.

What sort of changes has been made to uniquely celebrate this year’s Anniversary?

If we are to make comparisons of each celebratory event, I could say, each year has its own uniqueness. The difference made in this year is, however, there would be no carnival shows of regional administrations in Asmara, for each region would stage shows in its respective region and an agreement was reached to do so. Carnival shows of administrative areas and industrial plants of the Central region would also be conducted altogether from 21-to-22 May. The preparations that have been made in the carnivals shows are indeed in a very artistic manner. Changes have just been made in their arrangements.

What would be the benefits of displaying  carnival shows in each respective region?

The ultimate objective of showcasing the carnivals in each respective region is to encourage the regions make due preparations with resources at their disposal and there by to pave a way for their youths partake in innovative and renovative activities. This would enable the regions explore their potentials.

Could you tell us some of the carnival shows that would be presented by different administrative regions?

There would be exceedingly a number of activities that would be showcased by different firms. In the carnival show of May 21, for instance, there would be a show of 32 industrial plants and likewise 29 industrial firms would also participate in that of May 22. Cultural shows that were staged in Bahti-Meskerem square on 17 May would continue today in the afternoon hours in the same square.

Is there any new program introduced in this year’s Celebrations?

Among the new and first of its kind shows that would also be staged in Bahti-Meskerem square is “Kushet Ghedli.”This includes varied narratives, exhibitions and other entertainment programs. The primary objective of this program is to bequeath legacies of the struggle for independence through live narrations in which performers of the heroic deeds share views with fellow nationals and visitors from overseas. Individual and collective contributions of nationals in different phases of the journey towards independence would also be presented. The Kushet Ghedli might not cover sufficient scope of time and magnitude, but it would become a pioneering program that needs to be enhanced in the future. Next to these shows, cultural and artistic performances would be staged in cinemas of Asmara and Roma from 19-to-20 May. Live play performances which have been diminished for long would be highly revitalized there. We have also started to gradually expand the erecting of electric lamps to wider areas of Asmara that used not be embellished with lamps of different colors.