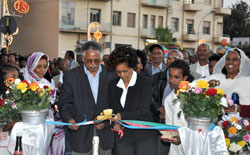 Reports indicated that carnival shows by the Administrative areas in the Central region yesterday uplifted the spirit of Independence Day anniversary celebrations in the capital yesterday.

Asmara, 22 May 2012 – Reports indicated that carnival shows by the Administrative areas in the Central region yesterday uplifted the spirit of Independence Day anniversary celebrations in the capital yesterday.

The vibrant carnival was inaugurated in the evening hours in the presence of Mr. Kahsai Gebrehiwet, Administrator of the Central region, Ms. Leul Gebreab, Chairperson of the National Holidays Coordinating Committee, other government officials and thousands of citizens. A total of 7 Administrative areas and 32 organizations participated in the event that depicted the country’s 21-year journey of ensuring development, the Eritrean people’s cultural values and various local products.

Expressing satisfaction with the impressive show, a number of observers asserted that no force would impede Eritrean development drive thanks to the mounting popular resolve against the schemes of enemy quarters. They further indicated that Independence Day anniversary is an occasion when the citizens should renew their pledge to honor the trust of martyrs, and that it is being marked in a time when the nation’s bright future is more apparent than ever before.

The National Holidays Coordinating Committee indicated that similar activities would take place here in the capital through the participation of 24 organizations and 6 Administrative areas.