Eritreans living in Australia, New Zealand, Denmark as well as the cities of Stuttgart, Toronto and Texas celebrate Independence Day with zeal 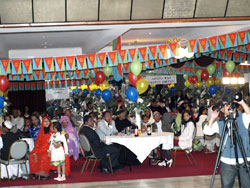 Eritrean nationals living in Australia, New Zealand, Denmark as well as the cities of Stuttgart, Toronto and Texas celebrated Independence Day with zeal.

Asmara, 24 May 2012- Eritrean nationals living in Australia, New Zealand, Denmark as well as the cities of Stuttgart, Toronto and Texas celebrated Independence Day with zeal.

Reports indicated that the celebrations in which many Eritreans and friends of Eritrea participated were characterized with zeal.

The participants of the celebrations in Melbourne expressed confidence that the development drive being witnessed in the Homeland is the springboard to a bright future.

Moreover, reports indicated that the Eritrean flag would be hoisted today at the Federation Square in the center of Melbourne city.

celebrations bear special meaning for being conducted at a time when the nation is striving to achieve economic emancipation in a spirit of unity and steadfastness. He also called on the participants to reinforce their resistance against hostile forces on the basis of unity and higher organizational capacity.

Similarly, Mr. Gebremichael Habtemariam, Chairman of the Eritrean community in Stuttgart city, expressed the community’s resolve to preserve the nation’s dignity and called on members to enhance participation in national developmental endeavors.

Also Eritreans residing in the US cities of Dallas and Texas, as well as Toronto, Canada, voiced determination to reinforce resistance against enemy quarters.