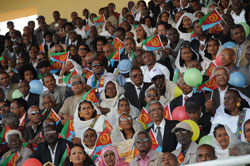 Eritrea today marked the 21st anniversary of Independence Day in a patriotic manner.

Asmara, 24 May 2012 – Eritrea today marked the 21st anniversary of Independence Day in a patriotic manner.

The celebrations at Asmara Stadium were also attended by a high-level delegation from the Republic of Sudan headed by H.E. President Omar Al-Beshir. President Isaias Afwerki delivered a key-note speech highlighting the multi-faceted development endeavors underway in the country, as well as the Eritrean people’s solid unity and determination to put up continued staunch resistance against anti-Eritrea forces.

For the full text of the President’s speech, see the separate content.