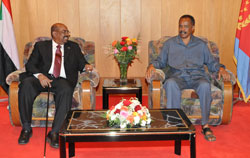 Presidents Isaias Afwerki and Omar Al-Beshir of the Republic of Sudan held talks on bilateral relations, developments in Sudan, as well as regional and international issues of interest to the two countries.

Asmara, 24 May 2012 – Presidents Isaias Afwerki and Omar Al-Beshir of the Republic of Sudan held talks on bilateral relations, developments in Sudan, as well as regional and international issues of interest to the two countries.

Regarding President Al-Beshir’s visit to Eritrea and the talks between the two leaders, the Sudanese Foreign Minister, Mr. Ali Kerti, told reporters that there exists shared view as regards various regional and international issues, and that the current visit and meeting is a continuation of the prevailing strong ties between the two sides and the regular consultations.

He added that President Isaias has assured his Sudanese counterpart that it is Eritrea’s desire and hope to witness relations between the Republic of Sudan and South Sudan getting normalized.

Replying to a question on the handling of the so-called ICC in relation with the Sudanese situation, as well as President Al-Beshir’s visit to Eritrea, Mr. Kerti said that Washington’s opposition to the ICC’s stance on the one hand and its attempts of penalizing a country that does not collaborate with the organization on the other fully attests to the continued US political adventurism. He further explained that President Al-Beshir would continue the regional and international visit that began with Eritrea.

Following their meeting at the State House, the two leaders walked in the streets of Asmara City and took part in the popular celebrations marking Independence Day anniversary.

On his personal observation of the enthusiastic spirit of the citizenry along the streets of Asmara, Mr. Kerti said: “the event is a telling reply to all those forces that do not wish peace and wellbeing to peoples.”