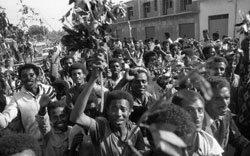 When I consider the things on the other side, I try to define inde¬pendence as a secure or safe life for the citizens of a country.

It is safe life for students, secure life for farmers, safe life for government employees, business men and others in which everybody is provided with an enabling environ¬ment to effectively exercise their rights and accordingly improve the quality of their life. I never forget one of the things my mother used to say in her regular prayer.

When I retrospectively try to recall it, the statement that impresses me more is: O lord please provide us with a government that enables a farmer to freely farm his land and a business man to freely (plus responsibly  emphasis added) do his business. At that time, this was not clear to me as I was a kid. I have memorized it not because I was much impressed by it at the time. I was just able to memorize it be¬cause my mother used to repeat¬edly say this during the colonial time when life was less secure for people to safely do what they were supposed to do. For example, the soldiers who used to come to our village from their camps in the nearby towns were in the habit of looting the goats, sheep, chickens, cattle, donkeys and the like that are owned by the poor people in the village and in many other villages. In such a case, if the owner hap¬pened to deal with them, at least to retain some of such assets, they could simply kill him as nobody was there to ask about such admin¬istrative malpractices. Life under colonialism was that insecure. That is when I try to retrospectively examine what my mother was re¬peatedly saying in her prayer and when I try to picture how life was then, I can see that she was hoping for independence as life then was insecure for all people in all walks of life.

I also tried to remember what was happening to me as a student when I was attending my elemen¬tary studies right before the inde¬pendence of Eritrea. I along with most school mates had to travel daily around 10-16 kilo

meters to come to my school. At that time, there were not schools in most villages in Eritrea. So access to education as a basic right was considerably limited. Many of my villagers were not mo¬tivated enough to go to school for the said reason. If a person is not educationally empowered, he or she is not expected to be economi¬cally and politically empowered. This is to mean that access to edu-cation is a key for improving life.

Today most villages have schools and I am sure enrolment rate has significantly improved. The only thing we should do in this case is that we need to be considerably committed to ensure that there must be quality services provided in the schools. It may be hard to ensure this overnight.

Our village used to be controlled neither by the EPLF nor by the Derg regime. Sometimes, the Derg soldiers spend some days there and sometimes the Jemahir (a name for members of public administra¬tion during the struggle for inde¬pendence), who were responsible for mobilizing the people secretly through clandestine cells within the masses, spend some days there. So when we come to the nearby town where our school was located, we were being perceived by the sol¬diers who used to face us at the checking points suspiciously. When we try to get to our school through the short-cut routes, we were being seriously punished by the soldiers. Hence, we used to miss classes frequently. Life was that hard and insecure then.

When it comes to other factors that make life insecure, there were also many things that help you pic¬ture how life before independence was – that is things that enable you to have a mind picture of the other side so as to understand what inde¬pendence may mean. Before inde¬pendence, there were no health fa-cilities in all the villages in Eritrea. The reason? Colonial administra¬tions were concerned not about the people but about what is essentially of concern to the colonial masters.

As a result, all the people and especially mothers and children had no secure life. Now almost all villages in the country have either a health center or a health station. When we compare life now and then, in this respect we can easily and clearly understand what inde¬pendence may actually mean.

These are just a few of the things that can enable us to understand what independence really is and what lack of it may mean. Overall, independence is an opportunity to cure the limitations related to the aforesaid ones.

While it seemed to most of us at first that independence meant that everything we hoped for would be materialized simply because we became an independent state, time has shown us that independence is not an end; it is a means. Indepen¬dence is a challenge and the burden that is associated with it is likely to be shouldered by the youth. It was primarily that youth’s considerable contribution that has made Eritrea an independent state. It must be the youth who are expected to make Eritrea a prosperous country.

What makes independence challenging among other things is that it is not limited only to uprooting colonialism. Rather fighting the ills associated with colonialism is one of the most important factors that make independence much more sustainable. What ills? Ills including differ¬ent forms of inequities resulted be¬cause of colonialism and the concentration of services in specific areas – some urban centers. In this case, what is being done through affirmative actions to make education not only available but also accessible to segments of the society who were neglected and denied access to education during the colonial era has to be praised.

A week long celebrations that demonstrated the reality in the country