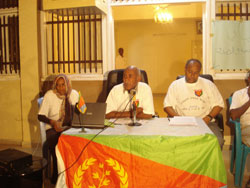 Eritreans residing in Khartoum, the Sudan, invited Sudanese guests and friends of Eritrea celebrated Independence Day on Friday, 25 May.

Asmara, 27 May 2012- Eritreans residing in Khartoum, the Sudan, invited Sudanese guests and friends of Eritrea celebrated Independence Day on Friday, 25 May.

In the celebrations conducted under the theme “Eritrean Independence: Core of Unity”, Mr. Yemane Tesfaselasie, chairperson of Eritrean community in Khartoum and its environs, said that development programs are well progressing through popular participation and expressed resolve to ensure Eritrea’s stability and economic progress.

Mr. Semere Kinfe, Eritrea’s Consul in Sudan, underlined that the Independence Day celebrations is the fruit of the toil and strong resistance of the Eritrean people living inside the country abroad and that the country’s development progress would not be disrupted by enemy conspiracies.

From participants, Ms. Eden Taddese and Mr. Mekonnen Abraham explained that the honor and the peace that the Eritrean people are enjoying is the result of the huge human sacrifice paid. They also expressed resolve to back up for the success of the national development programs.

Likewise, the Embassy of the State of Eritrea in Khartoum celebrated the 21st Independence Day on 24 May in which Sudanese delegation led by Eng. Ibrahim Mahmud, Minister of Internal Affairs and representative of the President of Sudan, representatives of different Sudanese political parties, regional and international organizations, and members of the diplomatic mission in Sudan and friends of Eritrea participated.

During the occasion, First Secretary of the Eritrean Embassy, Mr. Ibrahim Idris, underlined that Eritrea is not hostage to enemy conspiracies and that with strong resistance is registering commendable economic progress. He further reiterated that the economic development registered vis-à-vis the short years of independence would create more impetus.

Eng. Ibrahim Mahmud on his part expressed that the relations between Eritrea and the Sudan is developing in all aspects and that the fact that President Omar Albashir has joined the Eritrean people in the celebrations in person  is an expression of the strong relationship between the two countries.

Dr. Atjani Sisi, President of Darfur region on his part appreciated the brotherly effort President Isaias is conducting to bring peace and stability in Darfur region.

Reports indicate that the Independence Day celebrations would continue in different parts of Sudan until June 7.