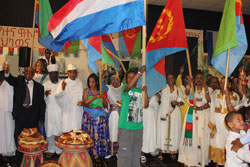 The 21st anniversary of Independence Day has been celebrated with patriotic zeal in Rotterdam, Holland, San’a, Yemen, Kuwait and Santa Rosa, USA.

Asmara, 28 May 2012 – The 21st anniversary of Independence Day has been celebrated with patriotic zeal in Rotterdam, Holland, San’a, Yemen, Kuwait and Santa Rosa, USA.

Speaking during the celebrations in Rotterdam, Mr. Tekle Yacob, chairman of the National Holidays Coordinating Committee of the Eritrean community there, underlined that the vibrant spirit of celebrations demonstrate the unremitting popular resolve against anti-Eritrea schemes. Mr. Solomon Mehari, head of consular affairs in Holland, gave extensive briefings regarding the development programs under implementation in the Homeland and the popular participation in the process.

In the celebrations conducted in San’a on May 25, the community members asserted that the development goals being pursued in Eritrea have their roots in the people’s participation, and that the nation would as ever remain dignified.

Reports indicated that a number of activities featured in the Independence Day celebrations by the Eritrean community in Kuwait. The community members explained that economic development achievements in the

Homeland have witnessed a bright future, and that they would reinforce participation in the national development drive.

Likewise, Eritreans residing in the US city of Santa Rosa celebrated the special event with zeal. Expressing congratulations to compatriots inside the country and their leadership, they expressed resolve to back up development endeavors in the country.