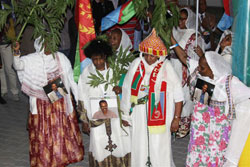 Indicating that the historic event is an occasion for renewing the pledge to back up national development endeavors, members of the Eritrean community in Rome expressed readiness to fulfill national obligations. Speaking on the occasion, Mr. Zemede Tekle, the Eritrea Ambassador to Italy, underscored that Eritrea has made remarkable accomplishment in various domains in line with the policy of self-reliance, and that external conspiracies would never sap the attained capacity of the nation which is a stepping stone to a bright future.

The Eritrean community in Cairo city equally voiced resolve to back up the national development drive. Mr. Osman Mohammed Omar, the Eritrean Ambassador to Egypt, said in a speech he delivered on the occasion that the Eritrean people’s steadfastness against all odds attests to the concreteness of the nation’s bright future.

Meanwhile, reports indicated that Independence Day was celebrated in Nairobi city on May 26, the activities of which event witnessed active participation of youths and children. The community members also voiced determination to enhance participation in endeavors to reinforce national development.

The Day was also colorfully celebrated by Eritrean nationals residing in France, who reiterated that they would as ever demonstrate staunch resistance against anti-Eritrea schemes.

Likewise, Eritrean citizens in Juba expressed confidence that the nation would attain higher stage of development thanks to the unremitting endeavors being exerted by the citizenry and the leadership. Speaking on the

occasion, Mr. Tekle Gebremeskel, the first Eritrean Ambassador to the Republic of South Sudan, underlined that the celebrations have portrayed the deep meaning of the special event.