Presidents Isaias and Museveni hold talks on bilateral relations and regional, as well as international issues 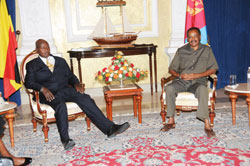 Presidents Isaias Afwerki and Yoweri Museveni held talks at the State House in a cordial spirit of fraternal cooperation and understanding on bilateral cooperation, regional peace and security, regional integration as well as other issues, including the revitalization of the African Union.

Asmara, 30 May 2012 – Presidents Isaias Afwerki and Yoweri Museveni held talks at the State House in a cordial spirit of fraternal cooperation and understanding on bilateral cooperation, regional peace and security, regional integration as well as other issues, including the revitalization of the African Union.

The two sides discussed in depth the situation in the Horn of Africa focusing on the strategic objectives of achieving regional peace, security and integration. They agreed to work together to resolve conflicts, prioritize economic and social development, as well as promote trade and infrastructural links among the countries of the region.

Both leaders reaffirmed commitment to the independence, unity, sovereignty and territorial integrity of Somalia and agreed to work together to foster the establishment of a national government capable of ensuring peace, security and development.

The two sides voiced deep concern regarding the tension between the two Sudans and urged them to resolve their differences on the basis of good-faith dialogue and lay the ground work for solid and mutually beneficial ties.

Furthermore, the two sides reaffirmed commitment to the African struggle for putting an end to marginalization and to achieve sustainable economic development. In this regard, they agreed to work together towards strengthening the AU and consolidate the sub-regional organizations, including IGAD.

At a joint press conference the two leaders conducted following talks between them, President Isaias pointed out that the two sides held exchange of views on significant bilateral and regional issues. He further explained that it is Eritrea’s firm conviction that it is possible to foster solid and close bilateral ties.

President Museveni on his part expressed thanks for a warm welcome accorded him in the course of the visit and that he is satisfied with the talks he conducted with President Isaias. He also indicated that there exists readiness on both sides to implement the agreements reached.

It is to be noted that President Isaias gave a state banquet last night at State House in honor of President Yoweri Museveni. Ministers and members of the diplomatic corps were present on the occasion. Besides, a cultural troupe presented performances.

Speaking on the occasion, President Isaias said that the Ugandan leader is making the official visit to Eritrea in line with the accord reached last year to reinforce bilateral ties, and that solid measures would be taken in this regard.

President Museveni on his part expressed appreciation for development accomplishments in Eritrea and asserted that African countries should pursue the conviction of self-reliance and foster bilateral cooperation.
Meanwhile, the Ugandan leader left for home today concluding official visit to Eritrea.