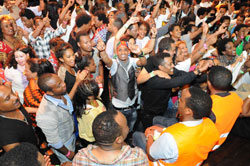 The Eritrean communities residing in Switzerland, Britain and Nigeria celebrated the 21st anniversary of Independence Day with patriotic zeal.

Asmara, 31 May 2012 – The Eritrean communities residing in Switzerland, Britain and Nigeria celebrated the 21st anniversary of Independence Day with patriotic zeal.

During the colorful event they organized in Geneva, the citizens residing in Switzerland said that they would enahnce participation in national development programs.  Mr. Zemhret Yohannes, Head of Research and Documentation at the PFDJ, explained in the seminar he conducted with the nationals that Eritrean independence could be preserved thanks to the clear national goals and strategies, as well as integrated and devoted popular participation.

During the celebrations held in London, foreign individuals held seminar with the Eritrean community and outlined development accomplishments in Eritrea and the role of women in building the nation, among others. Speaking on the occasion, Mr. Tesfamichael Gerahtu, the Eritrean Ambassador to Britain, lauded Eritrean citizens inside the country and abroad for demonstrating staunch resistance against external conspiracies.

Ambassador to Nigeria, pointed out that the task of nation-building and safeguarding sovereignty involves high popular responsibility.