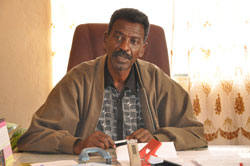 Areza sub-zone which covers the largest geographical area while compared to other sub-zones of the Southern Region has around 80 thousand inhabitants in around 110 villages that are also grouped into 22 administrative areas. This sub-zone is home to three of Eritrea’s nine ethnic groups and these are Tigrigna, Saho and Tigree. The inhabitants of this sub-zone earn their living as farmers, pastoralist, and they also engage in trade activities. This sub-zone is situated on about 2,090 meters above the sea level. Its temperate climatic condition is very favorable for cultivating wide range varieties of crops. Areza sub-zone borders to the east with Mendefera, to the south with Mai-Mne, to the west with Molqui sub-zone, and to north to Debarua and some parts of the Gash-Barka region. Let’s have a glimpse of this sub-zone in education, transportation, health, and agriculture sectors and also other social services that have so far been offered.

Agriculture is the major activity of the sub-zone and is extensively practiced particularly in the rainy season. Areas around Ubel areas, for instance, have vast and very fertile plains and that from areas around there good amount of agricultural yield have been harvested. Besides the regular agricultural activities that solely relay on seasonal rain, vegetables and fruits farming activities have been also carried out through the introduction of modern farming technology. Likewise, agricultural areas around Adi-Greto have been put under cultivation and the Dam around there has been playing a decisive role in supplying water demands. Most of the 14,000 hectares that are favorable for conducting agricultural activities have, however, been cultivated depending on seasonal rain. Thus, endeavors need to be exerted to highly introduce, in the area, modern farm practice.

The sub-zonal administration has been encouraging hardworking farmers through providing them with sufficient farm plots so as to enable them carry out daily activities enthusiastically. So, any farmer who is capable enough to judiciously cultivate large farm area has been offered a chance to do so. A dam in Adi-groto and well that have been drilled to water farmlands have been making due contribution in boosting agricultural yields. A total of 15 dams and micro-dams altogether are assets of this sub-zone. Around 50 medium and small water reservoirs in different areas of the sub-zone are also making substantial contribution towards boosting agricultural production.

Potable water supply has also been among the topmost priorities in the sub-zone. Hence, varied sorts of technologies that correspond to the geographical nature of different areas have been utilized to provide the inhabitants of the sub-zone with secured water supply. The inhabitant have in turn been making due contribution in ensuring the sustainability of water supply through engaging themselves in clearing dams that have been silted and thereby make such reservoirs ready to impound as much water during the rainy season. All this was done through the initiatives of the villagers. They have been making financial and they answered human power demands through personal participation. All in all infrastructural prerequisites for water supply have been implemented, but are still affected by the meager amount of rainfall during the summer time. According to Mr. Birhane Mengesha, administrator of Areza sub-zone, the department of water resources in the Ministry of Land, Water and Environment has made a research so as to identify the overall water resources of the sub-zone.  They have also come up with alternative solutions.

Areza sub-zone has two secondary schools that have been offering educational service in Areza and Mai-Dma. There are also a growing number of junior schools. Some areas of this sub-zone have transformed from no

educational facility to having a secondary school and there is no administrative area without a preliminary school. There were 4 elementary schools throughout the sub-zone during the pre-independence period; the Government has succeeded in constructing schools of varied levels in every locality. In short, owing to the concerted efforts that have been exerted, today, there are around 40 schools in this sub-zone. But, there is of course a need for the construction of additional junior and secondary schools in some central areas of the sub-zone. The construction of new schools would definitely enable the inhabitants of the sub-zone gain educational access in their respective locality. Therefore, far better services would be offered with the implementation of extra development projects.

Medical services have also been offered through the opportunities that have been available alike in the healthcare centers of Areza and Mai-Dma. The clinics in Ubel, Adi-Groto, Adi-Wsik, and Adi-Gulti are rendering good and sufficient services. Ambulances in Areza and Mai-Dma hospitals have been transporting patients from and to different areas of the sub-zone. There are also healthcare stations in 6 villages of the sub-zone which have been playing due role in facilitating vaccination programs and prenatal services. If not answered all the demands, the varied accesses provided so far have alleviated a number of health related challenges in great deal. The construction of additional healthcare provider institutions is still of a high concern.

Transportation service has also substantially been improved. The strategic road that links the Southern and the Gash-Barka regions have been facilitating interactions within the sub-zone and from and to other areas of southern region as well as to other regions of the country. Transportation is no more a problem as the newly imported buses have been solving the existed shortages. Harat Transportation Company has been transporting people from and to different areas of the country. Roads renovation is but a primary need of the sub-zone or else transportation challenges would be multiplied, if the main route continually degraded due to erosion. It is, however, important to bear in mind that the Government has charted out programs to asphalt this strategic route. Despite the achievements registered so far, some areas of the sub-zone are still having transportation problems.

A number of inhabitants, who have been settled in hill areas of Hantsetsa, have now been resettled in much convenient areas so as to become beneficiaries of the services that have been offered in the sub-zone. The Government has also built a dwelling house for each family. Likewise, inhabitants of Dereslasie were also resettled in to other area. The Government has so far constructed 200 houses in Hantsetsa and 500 houses in Dereslasie.

The High Hoisted Banner Of Pride And Glory