Eritrea on Her 21st 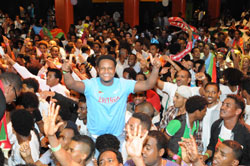 What a brilliant season of celebrations!  We are 21 years old now and legally adults! “Birki Wetsina”.

Eritreans sure know how to show their jubilation – a carnival of festivities up and down the country, where young, elderly, men, women, and children, able bodied and those with disabilities all danced, sang, and cheered day and night. May 24th has gone down in history as the national day of independence and of honour.

Those in the Diaspora and their friends celebrated too in every way they could: huge parties, with poems, songs, jokes, drama, and children’s events.  Serious messages were also delivered to the powers that be highlighting the unity of the people when it comes to the non violability of their young State – a State which has been recovered from ashes through decades and generations of personal sacrifice of almost every family of the entire Eritrean population.

At 21 Eritrea has now graduated into adulthood.  She has gone through teething problems, adolescence and teenage tribulations, while trying to tackle and unravel the many

pitfalls, attractions, risks and peer pressure that she had to face in the process of growing.  She dealt with every obstruction, calamity and abuse so bravely, with relentless effort that she is now known for her steely strength of character coupled with her customary social values of fairness, equality, and liberty.  The foundation and groundwork have been lain and underpinned.  There is no going back from now, except moving forward.

Pity those that missed out in the course of development of Eritrea.  Like an absent parent, those that chose to sit on the fence or watch and grumble from afar or those that tried to stir the pot on every opportunity, and some even sleeping with the enemy,  can have no right to point fingers or admonish or patronise anyone at this time.  They had their chance to contribute in the upbringing and cultivation of this brand new nation whereby they could have earned her respect.  Knowingly or otherwise they have become the laughing stock of those whose self interests they had been serving for all these years.  Their belated understanding of their failure is the reason for their current desperation and consternation.  The boat has sailed away without them on board.

Only three weeks ago these “absent parents” had hoped to re-enter Eritrea on the misguided assumption that Eritrea was in need of their imagined grandiose services.  Those plans fell through, big time, and shamefully, they had to unpack their bags, lick their gashing wounds and prepare for a long, a very long wait. The President of Eritrea, Issayas Afeworki, commemorated by walking from his Headquarters and all along the length of Godena Harnet (Asmera) amid throngs of cheering crowds.  Where on earth does anyone enjoy this kind of safety and comfort among his own people? May Eritrea continue to prosper year on year

The secret for success is only working hard