The High Hoisted Banner Of Pride And Glory 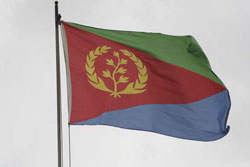 About a week ago, talking with a journalist friend about the Independence Day Anniversary celebrations, he happened to mention that he was preparing a television segment on the Eritrean flag. Curiosity got the best of me and I started wondering, there and then, how much I, or anybody else for that matter, knew about subject.

If I were to say that there are people who don’t know what the Eritrean flag looks like or what the colors stand for, I would be making the biggest understatement of the century. And that would make me totally way out of line.

But as regards questions pertaining to the origins of the Eritrean flag; the significance of the geometric symbols; the flag’s code of conduct; and so on… then perhaps things could get a little bit tricky.

The questions are really not that many but unfortunately neither were the people who knew all the right answers. And that’s what got me writing this piece on flags today.

If we were to talk about how flags originated in the first place, we would have to go way back in time to ancient history when flags were nothing but simply decorative streamers, or perhaps just ceremonial images. They were usually respected in the same manner as the person or thing that they represented.

Theories abound that flags were most likely developed long ago as something soldiers could recognize as their own during a war. In the thick dusty air of battles for instance, soldiers had trouble staying with their group so they would look up in the sky, see their flag waving through the air, and then could get back with their fellow combatants. The loss of a flag was a severe blow in a battle while the capture of the opponents’ flag could be a turning point in that battle.

The modern flag is said to have arisen in the seventeenth century, with the creation of the first modern states. Countries made flags an important aspect of their official identity.

Flags are used by countries for other reasons beyond just having something to fly in the air. A flag in fact represents an idea, or an ideal for that matter. It is neither a mere piece of decoration, nor an object to be honored for itself. It is honored for what it represents. Many flags are held in high esteem for their history; for the sacrifices made by the people; for the qualities for which the country and people stand. These flags represent a nation at international podiums, global conferences and other occasions held at the international level.

The Eritrean flag, the core issue of my article, is indeed the proud possessor of these traits and else. Divided into segments by a red triangle based on the hoist, the Eritrean flag comprises of three triangles with green, blue and red colors. There is a yellow wreath with an upright branch in the center and this whole motif is placed in the hoist-side of the red triangle. The upper segment is green and the lower blue.

This national banner, or the current flag of the State of Eritrea, has the same basic layout of the flag of the Eritrean People’s Liberation Front (EPLF), which has a yellow star at the hoist instead of the yellow wreath.

But Eritrea had its own sovereign flag and emblem as far as back in the 1950s. Following the temporary British administration until 1952, a UN mandate federated Eritrea with Ethiopia, consenting for Eritrea to retain limited control over its local affairs. And it was then that the Eritrean flag with a blue field and a green emblem, depicting an upright olive wreath and a single branch within, was adopted.

Although the origins of this blue flag are not conspicuously clear, documentations from that period reveal that the late Mohammed Omer Hakito, one of the prominent political leaders of the 1950s, had proposed a light blue flag with seven stars in the middle. The proposal was fiercely debated upon in the Eritrean Parliament, whose members finally voted unanimously voted for the blue filed flag with a green olive wreath emblem in the middle to be the official flag of the State of Eritrea.

There are also assumptions suggesting that the blue flag was donated by the UN, which enforced its will on Eritrea through its commissioner, Anze Matienzo, the Bolivian appointed to oversee the Federation’s implementation and draft its constitution. These assumptions however, hardly hold water.

This flag was used until the end of the 1950s, when the territory was absorbed and then forcibly annexed into Ethiopia. This triggered the armed struggle for independence.
The blue and green Eritrean flag, however, continued to be in use as the “flag of liberation” until the 1970s, until the EPLF officially came to being and proposed its own flag during the front’s First Organizational Congress in 1977.

The EPLF’s flag is dominated by a red triangle extending from the hoist to the fly (right) with complementary green and blue triangles above and below respectively. A yellow star is placed in the red triangle.
The colors and symbols that constitute a flag are illustrations of the idea or thought that make up the ideals of a country. Also reflected in the design is the patriotism and pride of the people of the country.

Accordingly, the green stands for the fertility of the country; blue stands for the sea; and red for the blood lost in the fight for freedom. The yellow star has double meanings: the color represents the mineral resources of Eritrea while the five corners of the star stand for Equality, Unity, Liberty, Justice and Prosperity respectively (and not necessarily in the same order).

The Eritrean flag from 1952 and that of the EPLF coexisted as the flags of Eritrea until independence and the subsequent referendum in 1993. When Eritrea finally took its rightful place in the world, following its declaration as an independent and sovereign country on May 24, 1993, the new National Flag that flew in the air was in fact the EPLF’s flag with the wreath and upright olive branch symbol derived from the 1952 flag replacing the yellow star.

Because a flag is a country’s way of portraying itself to the rest of the world, time, energy and creativity is invested in its design.

Vexillology, the discipline that deals with the scientific study of the history, symbolism, and usage of flags or any interest in flags in general, tries to promote flag design principles based on a body of research on flag history and

design. And some of the prominent examples of these principles are:

Keep It Simple: 1. the flag should be so simple that a child can draw it from memory.

Use Meaningful 2. Symbolism: the flag’s images, colors, or patterns should relate to what it symbolizes.

Use few Basic Colors: 3. limit the number of colors on the flag to few colors that contrast well and come from the standard color set.

No Lettering or 4. Seals: never use writing of any kind or an organization’s seal.

Be Distinctive or Be 5. Related: avoid duplicating other flags, but use similarities to show connections.

I am not a vexillophile, and definitely not a vexillologist, but I was excited to find out that our flag indeed complies, to the letter I might add, to these principles. Children can in fact draw it with ease, the colors are in good contrast with each other; there is no lettering of any kind; and it is very distinct.

I didn’t forget the fifth one. I instead saved it for last because when it comes to meaningful symbolism, the patterns in our flag have their own story to tell.

The yellow wreath symbol in the red triangle has 12leaves on each side, with six more on the upright branch in the middle, totaling altogether to 30, which is the number of years of the armed struggle for liberation that the Eritrean people had to endure.

That’s not all. The red triangle, which has its base at the hoist, extends towards the left representing the declining amount of blood spilt for the independence and sovereignty of the country. The complimentary green and blue triangles either sides of the red triangle represent the growing amount of fertility as well as land bounty on one hand and the vast marine resources and clear (unpolluted) skies respectively.

A flags can be unifying to a country, as it is the case in Eritrea, which can look to its flag flown high above the landscape in times of trouble and remember that the country will indeed go on. People that have never met before can feel unity towards one another knowing that they’re part of the same country and fly the same flag. It makes all Eritrean citizens feel like part of one team.

One of the persons to whom I ventured my questions about the significance of a flag is a high school teacher in Asmara. I have known him to be a man of rather unusual principles in life, and, true enough to his character, dismissed the importance of having a flag at all.

He was of the belief that the world was like one big village and there is no need of differentiating one another with flags and symbolic representations. He was adamant that flags were noting but mere symbols and that people could in fact identify with each other through their cultural practices and languages.

His quite relevant knowledge of political science, despite having majored in physics, hindered me from trying to convince him otherwise. I could only wonder what would the women, who dress up and braid their hair in the colors of the Eritrean flag, say to him if they ever confronted him.

And talking about dressing up in the colors or patterns of our national flag, I think it’s worth mentioning that people do that because they equate the flag with the country they love. But as far as international codes of conduct of flags are concerned, flags should never be used as wearing apparel, bedding, or drapery. But then of course, it wouldn’t be completely misguided to feel its wearing as a mark of patriotism, although some of us feel very differently about this issue. The very conservative recommend the use of patches and pins as appropriate, respectful and patriotic for people who want to display the flag on a personal level.

At any rate, the fact remains th

at to fly the national flag is a sign of pride and patriotism. It is a positive affirmation of loyalty and commitment. It marks out a country that has confidence in itself, and is comfortable with its place in the world, its history and its future.

Taking into consideration the importance of our flag, its deep significance, and of course the fact that the respect for the flag is one indication of patriotism, my journalist friend had raised an important question in the end of his program: Shouldn’t we dedicate a National Day in honor of our flag?

A timely question, I dare say, now that we just came from celebrating Independence Day and awaiting Martyrs’ Day, two events of great significance and components that essentially constitute, in one way or the other, the features of our flag.

Just and Constructive Engagement: the Ultimate Solution for the Sudans