The secret for success is only working hard 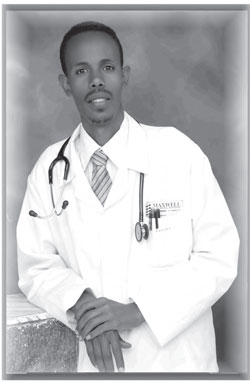 Could you tell us your back ground?

I used to stand first during my education from grade 1 to 9. However, at grades 10 and 11 I missed my concentration and I was not doing I used to be. I went to Sawa in the m7th round.

Where did you go after that?

What was your role as a foot doctor in the army?

Unfortunately at that time the TPLF regime declared war on Eritrea. And my job was treating the wounded.

Did you directly start treating the wounded or did you have additional training?

I didn’t have the chance of getting training besides that I took while I was at grade 10. But I was reading different medical books and journals that assisted me great deal in my job.

How was education in Sawa?

As I told you I was very much interested in education. It was only at grades 10 and 11 that I missed my concentration because I deviated to playing football. And in Sawa I took my education seriously.

How were you doing at the Orota School of Medicine?

Good! In 1998 when I joined the school I scored 3.3 in the first year and with that I got the opportunity of choosing the department I want to join and I selected the school of medicine.

Is it because you had some background that you selected medical school?

That could be the case. And I had the confidence of going successfully though it.

How was education at the Orota School of Medicine?

It was great. I had developed hard working and patience at the early stage of my age. That character helped me concentrate on my education in the medical school. As you know the profession requires hard working and concentration. You have also to refer different medical journals and books to upgrade you skill and cope up with modern technology.

What was the feeling of your parents at your graduation day?

They were delighted. They were after me with everything in their capacity from the day I went to Sawa. And when they see their son becoming a Medical Doctor you could imagine what they could feel.

What are you doing now?

I am assigned to Akordet Hospital and I am working there.

Eritrea on Her 21st

“The Peace in Eritrea Is Not A Situation; It Is A Culture” Dessalegn Aberra