People: Focused in minding their business 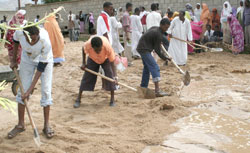 The saying “Dogs bark and the camel continues its journey” is deep rooted axiom in the Eritrean society. Every Eritrean aspires to live through his/her toil without expecting outside help. And that concept has been for many years now the unwanted axiom and the economic, social and political foundation. They want Eritrea behave like the others who are standing alert to hear and do what they are told to do. Many conspiracies have been weaved to disrupt and divert the attention of the Eritrean people from the political and economic path they pursue and if possible to put them under pressure so that they give up themselves and follow instructions coming from alien forces. This has been going in earnest for the last twenty years of our independence. Every attempt, however, was faced with strong resistance and that continued to surge the headache of those forces.

The logic behind of choosing independent path of minding own business and not allowing others meddling in the internal affairs and trying to act as a “good Samaritan” while with covert evil intentions comes form the initial formation of the society and the country.

The Eritrean society from the onset believes in unity in diversity. There is no history in Eritrea where we witnessed conflicts among religious and ethnic groups. What we have been witnessing is that every one respecting every ones religion, belief and customs. It is not every where that we observe leaders of the different religious groups coming together during celebrations of the different religions. But here in Eritrea it is common to see religious leaders coming to celebrate each others religious ceremonies. Moreover, community based living system is highly valued and practiced with people helping each other in times of need.

The other very important aspect is that Eritrea emerged as independent and sovereign state through paying high human and materials prices. The Eritrean people had to go through 30 years of bitter struggle for

independence. During those years the people had faced different unprecedented and horrific atrocities by the Ethiopian colonial regimes. People were indiscriminately massacred, property destroyed and ransacked, and villages burned.

Hence, these two realities and others make the Eritrean people unique from other nations that were handed over their independence in flag exchange ceremonies. In those nations we happen to observe lack of nationalism, rampant ethnic and cultural conflicts and heavy handed corruption.

Such countries are usually those which forget that a nation is the result of a long historical process during which consensual values emerge to furnish grounds for national concord and civil peace. The leadership tries to prolong its grip of power through inflicting conflict and hatred among the people. Equal share of resources is unthinkable and people are left desperate to do any thing at their disposal in order to live. There no such thing as religious and ethnic tolerance and living in harmony. The daily news events we are hearing from different media outlets is just that.  The reason is simple; they were handed over their independence in a gold plate and simply adopted the constitution and administration codes from their colonizers that were not based from their realities. Economic planning is copied; infrastructures are built by the companies from the ex-colonizers and the budget for implementation activities to salaries of government employees are expected from the aid they aspire to receive from them. It is an all out dependency and selling identity.  As a result the leadership and the people have nothing in common.

Self-reliance and economic dependency is an alien concept for many. And it is not a concept that the external forces would like to hear. Self-reliance and ownership of ones programs are the two very ‘evil’ words they never want see them uttered leave alone implemented. In reality and common sense these two concepts deserve acclamation and strong backup. But it is unfortunate.

Resistance of our people living under the enemy