Getting Even: An Eye For An Eye 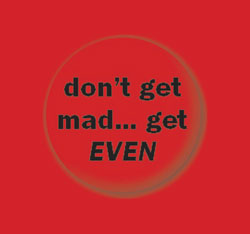 Mama told me it is an ‘an eye for an eye’ world that she gave me birth into; but the world is much colder than that harsh and cold tomb on the corner of the huge intimidating and bloodcurdling catacomb. It probably didn’t down to mama that the world has advanced into the ‘an ear and eye for an eye’ system while she was busy potty-training me.

Surely, it is a generation that believes in at least getting even if it is impossible to do more or worse than it has been done. To this my friends who are constantly getting back at each other with colder dishes of revenge and paybacks are live and moving testimony of the modern mentality towards paybacks. ‘Payback is sweet, especially when served cold’, said a friend of mine with evil smirk lightening up her dark complexion as she drove off without our other friend in the pouring cold shower of the rain. It was raining cats and dogs and our friend was only in a t-shirt and baggy denim, her bag and umbrella was in the car.

Revenge is no ice cream or some delicacy dessert sweet when served cold if it needs to be served at all. If it is any sweet, then it is a candy that has a sweet flavor on the mouth but a poisonous effect on the heart of both parties involved. However, the stance of the world on revenge and vengeance is crystal clear-it is an eye for an eye- as simple and quick as that. And despite the advocators of goodness and the good teaching that preaches us to ‘whosoever shall smite thee on thy right cheek, turn to him the other also’, the world teaches us to never let our guard down and get smote in the first place and if you ever get slapped anyway, it is only natural to return the favor long before you turn the other cheek.

I doubt that the other person would dare smite you twice if you retaliate back to his first smite. By the way the book never told us what our next move should be if that someone should smite the other cheek too. So this puts us in a very awkward situation. I am at a loss of words here.

“Don’t get mad, get even.” Advised a friend of mine to another, after hearing the shocking account of betrayal the friend encountered from someone she trusted very much. “I hate it when people waste their time crying over their spilled milk when they clearly can get up and knock over the milk on that someone’s cup.” she said as she threw her hands in an overly irritated gesture. In her opinion the contemporary society lacks the patience or the resolve to cook up some poetic justice or Shakespearian revenge and tends to get mad instead of getting even. This friend of mine has been stewing the coldest dish of revenge on her step-mother ever since she was only thirteen. True, her life with her step mother and step-siblings were no walk in the park. In fact it has demanded the resolve and concentration of every fiber in her body and system to keep herself ashore of the dark suffocating waters of dismay that threatened to drawn her, but imagine how the world would be if everyone with an evil step-mother, starting with Cinderella cooked up a revenge against their evil step-mother?

My friend stayed true to her purpose, i.e. getting revenge by becoming self-sufficient and successful for her step-mother to see. She wanted to get back at her step-mother by showing her that she has become someone important despite the hurdle and hurt she inflicted on her throughout her childhood. This friend of mine strived and worked hard to stay true to her purpose, mainly because the flame of revenge and vengeance were oiling the wheels of her motivation. After all these years filled with painful moments and gruesome experiences, she graduated, got married and moved out. Her husband is a very successful man and his good lucks seems to have rubbed on her too.

One sweet day, on a lazy Sunday afternoon, while driving through her neighborhood she saw her step-mother carrying a huge load on her shoulder and juggling with other loads in her hand- she looked like Santa Clause with his bag of goodies on Christmas Eve. My friend honked her car horn and drove by as she waived her hand at her step-mother in greetings. That particular moment sealed the revenge my friend has been planning on her step-mother. She did it. She looked down at her step-mother and showed her that they are in fact in different levels of livelihood. But what follows after didn’t ever occur to my friends would ever happen, it sneaked upon her. She was filled with remorse and regret that belied her longtime marinated resolve and spirit of vengeance. Instead of happiness and satisfaction, she was filled with emptiness and coldness that has nothing to do with the chilly weather of the day. She was miserable upon the completion of her revenge but also her whole life has been imprisoned with thoughts and burdens of revenge. It is true revenge makes you miserable forever.

Anyone can deduce without any strong cases or claims of reason that revenge doesn’t solve anything and that it sure doesn’t give one peace of mind upon executing it. On the contrary, revenge and the spirit of vengeance eat one inside out. Revenge imprisons one in his own misery and hatred and it chokes the bud of life from flourishing and blossoming. Have you seen how revenge and the spirit of vengeance eat up someone from inside? It withers away the life within while contemplating the dismay of the other life.
Let ask these questions and contemplate their options, can revenge finally solve the issues of betrayal? Can it cure the wounds of betrayal and hurt or sufferings? How far should we take our revenges? Is it only an eye for an eye or that we have to pay it back double the lethality of the first misdeed?

I am not asking you to give the other cheek but to curb and kill the spirit of vengeance. It’s always a paltry, feeble, tiny mind that takes pleasure in revenge. People don’t know that revenge, though sweet at first, is a poisonous candy. It is like a ride in a Ferris wheel, there is the thrill and all kind of adrenaline rushes while riding it but is all nauseous afterwards. Plus, those who offend us are generally punished for the offence they give; but we so frequently miss the satisfaction of knowing that we are avenged and rush to take revenge on our owns.

As Martin Luther King, Jr. put it, ‘The old law of an eye for an eye leaves everybody blind.’

“I was very much inspired from what my father was doing”