Thy will be remembered for eternity 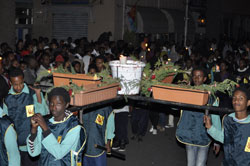 As Eritreans joyfully and enthusiastically celebrate May 24, Independence Day, they also equally celebrate June 20, Martyrs Day, in commemoration for those heroes and heroines who paid the dear lives for the Independence Day to happen. On the eve of the Martyrs Day, June 19, every Eritrean wherever he/she lives will conduct candle light vigil symbolizing that our heroes gave their lives for us to walk proud as Eritreans and live as people free and decide our destiny by ourselves. What a big and priceless gift we got through their blood and life. Eritreans all over the world are inspired and captivated by the sacrifices of their sons and daughters and vigilant to see the country moving forward towards the vision our martyrs would like to see. Making Eritrea prosperous in which its people live in peace, harmony and affluent. That to happen, every Eritrean believes and is ready to defend the country in all capacity from evil forces that would like to see history reversed.

We rightfully know that some forces had no desire to see independent Eritrea and to that end they did every thing in their disposal to stop it from happening. The conspiracies weaved against Eritrea and Eritreans are countless that could be written in volumes. But all the conspiracies were foiled by the staunch resistance and determination by Eritrean people. The deaf ear of the international community in the 60s when Eritreans were demanding their independence through peaceful means, the unholy alliance of the superpowers with the successive Ethiopian colonizers during the armed struggle, the unsuccessful political maneuvers on the part of some external forces to deny Eritrea its independence during the last stages of the armed struggle, the political shuttles and covert communications that were made to deny the recognition of the Eritrean sovereignty, the endless conspiracies during the TPLF aggression to present day are all but volumes and volumes of the ill intentions of those external forces.

The end result of all these machinations was only to harden and toughen the resolve of the Eritrean people to defend their country and their sovereignty at all costs. Every evil did is responded with guts and determination knowing it would doom to failure like those in the past. Eritreans are to date confident and well aware that nothing, be it in astronomical scale or otherwise, would deter their chosen economic and political path.

They also know that the path that Eritrea is taking can only be described as good example for others. And this path is seen as contradicting the principles of the corporate magnets who would like to see their interest served and the right of others disgraced. They see it as direct interference to their hegemonic interests. Hence, they try to sow seeds of discord to inflame chaos and when that happens they rush to act as “Good Samaritans” in the name of making peace and thereby to ensure that their interests are protected.

We have witnessed different diplomatic shuttles pretending to end conflicts that were created by them. What they call the “Arab Spring”, the problem in the Sudan, in many West African countries, even the resent case

in Myanmar are but few from the many examples of creating chaos and rush from here and there in the name of solving them. The people of those countries are immersed into a conflict they hatched and no foreseeable end of the conflicts. Eritreans are well aware of that and they are not ready to open any door for that to happen.

More over, Eritreans are peace loving people for they are aware of the consequences of war. They have gone trough it for thirty years long of struggle to get the peace they were longing for. War is only destruction and displacement.

The long years of armed struggle for independence was an opportunity for us that working in unison is the only and a better way to achieve the desired outcome. Opening rooms of discord could only lead to the satisfaction of those forces who would like to take advantage of it. Hence, the coming of all Eritreans from all walks of live, religion and ethnic groups to rise up against colonialism and gain their rightful freedom was the foundation of the nation building endeavors.

With the human and material price the Eritrean people paid for independence they have also pledged to their martyrs that they fulfill their vision. Our martyrs’ vision was to see developed Eritrea in which its people live in harmony and peace and minds it affairs and live with its neighbors in peace. The dedication and hard working we are witnessing today in Eritrea is also part of the pledges to our martyrs. The Eritrean people and its leadership know that development with internal capacity is long lasting and never shakes with winds coming from here and there. It would be solid and transferred to posterity. Development outside of internal capacity is shakable with the change of policy of those who put their hands in the efforts, if we could call it efforts. Any one who happened to read the famous book “Economic Hit Man” will understand it very well.

Eritrea is leading the field in terms of social justice and equitable growth where the country’s resources are invested in such a way that the standard of living of all its citizens can be harmonized. This is being done by ensuring that every citizen living anywhere in Eritrea has access to health facilities, education, clean drinking water, transport links and enhancing their capacity to produce food. This all is being done with internal capacity and resources. And that was our Martyrs would like to see happening.

Laying foundation of development (Part I)