United To Assist the Families of the Fallen Heroes 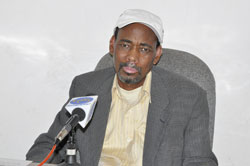 Share
The martyrdom Eritreans paid to achieve independence stands beyond compare. To honor the noble cause the martyrs fall for and as an indication of respecting the selfless sacrifice of each martyr, the Government has ever since 2004  been supporting families of the fallen heroes. To assist the families of the fallen heroes has then been a national priority. Of course nothing compares to the sacrifice the martyrs made for the common cause, but acknowledging their heroic and matchless deeds is just a moral obligation of every national who is enjoying a secured lifestyle where everything goes smoothly and without worries of any sort. Noticing the grand and far sighted vision of the martyrs, Eritreans inside the country and abroad have been reinforcing Government’s initiatives through monetary and in kind contribution.

In 2011, to assist the families of the martyrs, the Government has paid more than 326 million Nakfa,” said Mr. Zerai Tekleab, director of social welfare in the Ministry of Labor and Social Welfare.What is more is that, apart from depositing into the account of Martyrs trust fund, the people of Eritrea have been assisting each household of a fallen hero. Eritreans in each of the country’s 6 regions have been equally sharing what is expected of them to assist the families of the martyrs. The supporting initiatives that have been taken throughout the country have not been confined to monetary or in kind assistance, but the relations maintained among the supporters and the beneficiaries have been very strong.

It is important to notice that in 2011 diaspora Eritreans have contributed around 8 million Nakfa and inhabitants of the Central region alone have contributed 2 million Nakfa. In this same year, more than 3 million Nakfa have also been contributed to the account of martyrs’ trust fund. This amount includes a smaller portion of the initiatives taken by individuals for there have been nationals who have been assisting the families of the fallen heroes without making any publicity.

Community based assistance have also been offered to the families of the fallen heroes. Communities have been engaged in supporting these families in any societal activity. There are a number of people who included these

families in their daily plans such as in assisting the children of the fallen heroes in their academic carrier, in constructing and renovating houses of these families.  A worth mentioning community based initiative taken by the inhabitants of Teseney sub-zone is uniquely known for its organizational aspect. The assistance program which begun in 2007 continued to this date.  This program has been carried out in phases. In the first phase, 208 families have become beneficiaries to be rehabilitated in fields of their choice through expending more than 2 million Nakfa. In the second phase, the inhabitants of Teseney decided to rehabilitate 99 families through monetary support of around 570 thousand. In the third phase which is carried out in 2011, a total of 124 families have been rehabilitated through 1.1 million Nakfa. Likewise, 108 families have received financial support.

The initiative taken by the inhabitants of Teseney is thus very exemplary. Even though, communities in other areas of the country have been doing their best, but need to learn from what has been accomplished in Teseney. What is more gratifying is that youths have been actively engaged in assisting the families of the fallen heroes. Youths living inside the country and abroad alike have been making due share towards the success of the benefit scheme. The initiative taken by the students of Halay Secondary School to contribute in the endeavors made to assist the families of the fallen heroes is, for instance, a first of its kind. These students have so far been familiarized with the families whom they are to support.

Undeniably what the martyrs paid for the well-being of the Eritrean people cannot be compensated whatever measures taken to assist their family members. But, nationals could gain moral satisfaction from engaging in such benevolent acts of supporting the families who sacrificed their bread winners. It is not an easy task for an individual to assist 50 families, but this has been a reality for the benevolent nationals have been expressing conviction to live up to martyrs’ trust. These nationals have been contributing not only financial support but have developed strong ties with the families of the martyrs and have been participating in person in their social affairs as well. The friendship that has been developed between the families of the fallen heroes and the supporters is indeed of a greater value.