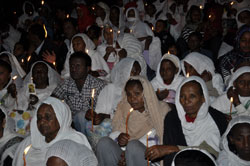 Eritreans all over the world commemorated Martyrs Day, June 20, under the theme “Lofty Sovereign Dignity-Fruit of Supreme Martyrdom”. The official commemoration began on the 19th of June during the evening hours with candle light parades and artistic performances. In Asmara thousands of people from all walks of life flocked to the main street of Asmara, Harenet Avenue, to commemorate the day with candle light ceremony.

The ceremony was accompanied with Marching Band and artistic performance by different singers in different languages. During the occasion, Ms. Leul underlined the meaning and essence of Martyrs Day to the people of Eritrea who paid unprecedented scarifies to free the country from the yokes of colonialism and put Eritrea in its rightful place in the annals of history.  The candle light ceremony was breathtaking especially observing many mothers carrying the photographs of their martyrs sons and daughters. They were carrying the photographs not with grief but with the sense of pride and dignity. They are well aware that the scarifies their sons and daughters paid was not in vein but for us Eritreans that were walking our heads high in front of them during the occasion. Every Eritrean that walks in front of the mothers carrying the photos of their martyred sons and daughters was glancing on the photos with respect and solemnly thanking them for the gift they provided us.

June 20 was the big day in which thousands of Asmara residents flocked to the Martyrs Cemetery to pay tribute to the fallen heroes who are rest in peace there. From the early hours in the morning people gathered at Shida area and were joined by President Isaias Afwerki, ministers, Army commanders, senior PFDJ officials and religious leaders. And from that they walked all the way to the Patriots Cemetery led by March Band and youth carrying wreath of flowers. Upon their arrival to the Patriots Cemetery President Isaias Afwerki, General Sebhat Efrem , Minister of Defense, Mr. Alamin Mohammed Seid, PFDJ Secretary, Ms. Leul Gebreab, Chairperson of NUEW, and Mr. Kahsi Gebrehiwet, Administrator of Maekel region, laid wreath of flowers at the cemetery.

In a speech he delivered on the occasion, President Isaias expressed appreciation to the Eritrean people inside the country and abroad for demonstrating praiseworthy joint endeavor towards reinforcing the task of ensuring

economic development on the one hand, and safeguarding the nation’s sovereignty and dignity on the other in line with the imperative of honoring the trust of martyrs. He also called on citizens to reaffirm their pledge through mounting staunch resistance against external conspiracies and putting up hard work.

Mr. Kahsai Gebrehiwet, Administrator of the Central region, on his part underlined the responsibility the Martyrs Day shoulders on the Eritrean people and their leadership as regards realization of the cherished goal of ensuring the nation’s all-round development.

The commemorative event was accompanied with songs, poems and short dramas depicting the occasion.

Martyrs Day is observed every year with great enthusiasm and sense of patriotism. Eritreans residing all over the world also observe the day with great nationalism and pledging commitment that they would do their expectations to reinforce the development drives taking place in the country.

This year’s Martyrs Day was observed at a time in which Eritrea came victorious from uncountable external conspiracies. The people of Eritrea, wherever they live, have demonstrated once and again that no matter what they would firmly stand in unison to defend their country from what ever conspiracies come to their way. They also swear from the bottom of their hearts that they would do whatever it asks to develop their country in which its people live in peace and prosperity. That is the meaning and essence of Martyrs Day to Eritreans.

In Memory of our fallen Heroes and Heroines