Students Summer Work program to get underway on July 9 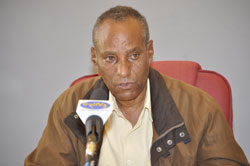 The Ministry of Education pointed out that Student Work Program would get underway on July 9.

Asmara, 23 June 2012 – The Ministry of Education pointed out that Student Work Program would get underway on July 9.

Indicating that preparations for the program have already begun in the Southern Red Sea region, Mr. Fitwi Woldegiorgis from the Ministry said that more than 27,000 students, 33% of whom are females, and 1,300 coordinators, as well as agriculture experts would take part in the national campaign. The objective of such an undertaking is to create an environment of growth for students on the simultaneous bases of work and education, and thereby enabling them become productive in national development programs, he added.

The Ministry further disclosed that the task which is expected to involve 160 stations has targeted plantation of more than one million tree seedlings, hoeing of 3 million flourished trees, construction of 1,500 Km-long terraces and renovation of 250 Km-long water catchment walls, besides the accomplishment of 31 aspects of agriculture-bound development chores. It further pointed out that assessment reports pertaining to last year’s program indicate that the objectives have been met.

Mr. Fitwi asserted that afforested areas should be treated in the form of enclosures so as to ensure expanding the volume of vegetation.